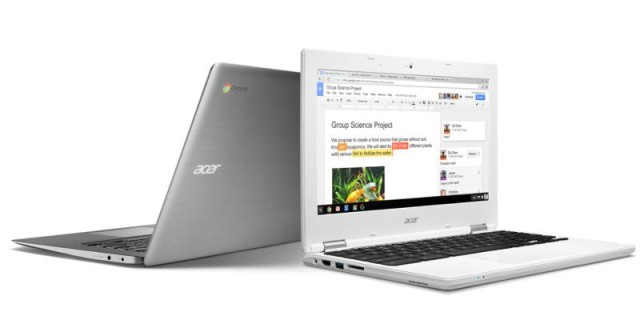 Last month at Google’s I/O 2016 event, it was revealed that soon we’ll be able to use Android apps on Chrome OS. This news has recently made Chromebooks be worth twice as much as they were valued before. Also, around this time, Google also released Acer’s Chromebook 14 and Chromebook 11. The latter, much like almost all of the Chromebook models is a low range laptop. It’s powered by a dual core processor Intel Celeron N2840 that runs at 2.1 GHz and in terms of memory it features 2 GB of RAM. It also sports only 16 GB of SSD storage space because Google strongly encourages people to use its cloud. Furthermore, it has an 11.6 inch display with a resolution of 1366 x 768 px.

However, now that these Chromebooks will be able to run Android apps on them without the aid of emulators or third party programs, it means that they will definitely be worth more than the average low range device. Think about it, they will offer a PC like experience for Android users and they have probably been craving for one for a long time. However, it won’t have the touch screen feature but you don’t really need that on a laptop so that won’t be that much of an inconvenience.

Now that we’ve told you this, know that you can buy a Chromebook 14 and a Chromebook 11 for the price of only 299.99 dollars and 179.99 dollars respectively. So, as you can clearly see, it’s in the pocket range of almost everybody.