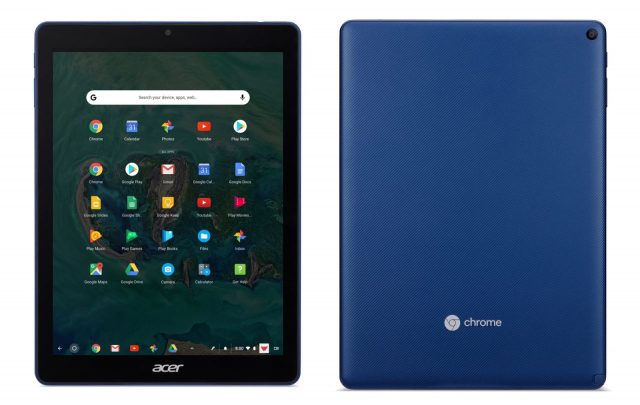 The company Acer has announced recently the latest Chrome-OS device, the Acer Chromebook Tab 10 (D651N). Keep in mind that this is not a Chromebook or a Chromebox, it is a tablet that is powered by Google Chrome’s operating system. And the first one to run on such an OS, at that.

Acer has announced this device is meant for educational purposes, which is unsurprising considering the popularity of Chrome OS in classrooms. It comes armed with a bunch of classroom-oriented software tweaks, as well as an improved form factor for students compared to traditional Chromebooks.

In spite of the Chromebook Tab 10 being a tablet, its core specs are very much in line with what one might expect from a premium Chromebook:

Since this is a tablet, Acer can’t really stray away from the usual design. Even though this is just another one, Acer has stated that the Chromebook Tab 10 was build to be slim and easy to carry in order for it to be suitable for a classroom.

The device has quite wide bezels, which could be an advantage, considering the tablet will be used by lots of students in an educational environment.

A textured back plate will play the role of the device’s rear, which will help with the grip on the device. There is also a covered stylus slot in the bottom right corner.

Since it is a tablet, the Chromebook Tab 10 cannot really brag about its camera capabilities. However, there are still two camera in it, just because.

The main camera on the device’s rear is positioned in the top right corner and it a 5MP one. The front camera is the secondary one and it is a 2MP camera, designed for video calls.

Additional connectivity support includes 2×2 MIMO 802.11ac Wi-Fi and Bluetooth 4.1. Users can also expect to find a 3.5 mm jack included (dual port) and the ability to expand on the storage thanks to the inclusion of a microSD card slot.

Based on the USB 3.1 standard and assuming the voltage is 5V, then the mAh capacity of the battery should be somewhere between 6000 and 7000 mAh.

Acer claims that during normal use, the battery will offer up to 9hours of power off the charge, which is just enough for a school day. The stylus does not rely on battery power and only the tablet needs to be charged.

The Chromebook Tab 10 comes in April to North America first. It is expected to arrive with a $329 price tag

Right now, the Chromebook Tab 10 is only scheduled to be released in one color – “Cobalt Blue”

What do you think? Is the Chromebook tab 10 worth purchasing and using for a school environment? Tell us in the comments! And as always, stay tuned for more news on gadgets and technology!