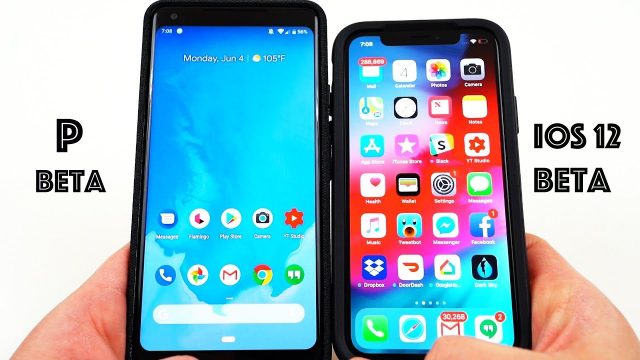 Although they are still under development, so some of the features that will be integrated into the final version are not yet available, the main mobile operating systems, Android P and iOS 12, are finalizing their full implementation. Let’s see now, according to what we know so far, how Android P and iOS 12 compare.

In recent years, it is true, Android and iOS tried to be as similar as possible, not only in terms of aesthetics but also at a conceptual level, where one was inspired by the other.

There are differences such as Apple’s commitment to augmented reality and remarkable similarities such as the functions to control the time of use.

Under the hood, both iOS 12 and Android P have opted to work harder and achieve greater performance. The aim of both operating systems is to make them more user-friendly, regardless of the hardware.

One of the small developments necessary (or demanded by its users) for iOS 12 has been the clustering of notifications. At last, Apple did it. With this version, users will be able to consult notifications in a more intuitive way.

A visualization that Android had it better resolved, on the other hand. Android P is the platform that seeks simplicity and introduces a new way to navigate the interface and program specific notifications.

The GUI and the notch support

On a visual level, Android P will offer clean and austere visuals, at the same time, although it will not mean a drastic change in comparison to the current version.

In addition, given the high compatibility of many mobile phone manufacturers, the operating system must be adapted not only to each type of terminal but also to the different types of customization that manufacturers incorporate.

Hence, some of the Android P functions are different depending on the phone model, for example, if the phone has a notch or not, as Android P offers a slightly different GUI on the phones with a notch.

With iOS 12, Apple takes it easy, as, at the moment, only the iPhone X has this notch and does not have to look for solutions for the iOS to adapt to other types of devices.

In short, Android P remains a more customizable OS for mobiles, while iOS 12 keeps the trendlines set by its predecessors.