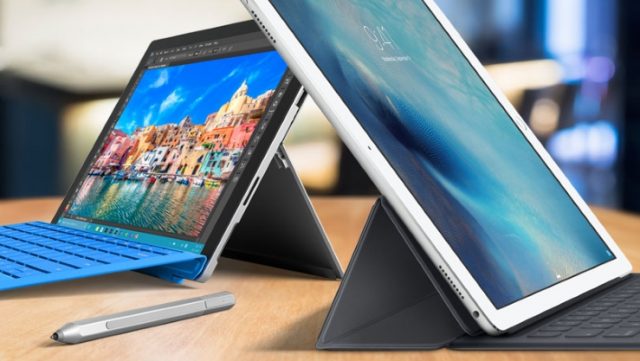 Apple usually competes against Samsung in the smartphone industry but when it comes to tablets Apple has an even bigger competitor, Microsoft. The competition started when Apple launched its iPad Pro offering and Microsoft unveiled its Surface Pro 4. Both devices are hybrid tablets that are capable of replacing laptops and their prices are very similar as well. Today we’re going to take iPad Pro 12.9 inch and compare it against Microsoft’s Surface Pro 4. We will focus this brief competition on display technology, hardware power and operating system.

The Cupertino based tech giant prides itself with the fact that it’s able to create some of the most powerful processors on the market. Therefore, iPad Pro is powered by Apple’s own-made A9X processor. The chipset is very impressive, scoring 5416 points on the Geekbench 3 test.

On the other hand we have Surface Pro 4 that is powered by Intel Core M3, Core i5 and Core i7, depending on the acquired variant. Surface Pro 4’s processor is more than capable of providing users with impressive hardware performances and it even scores 6811 points on the Geekbench 3 test.