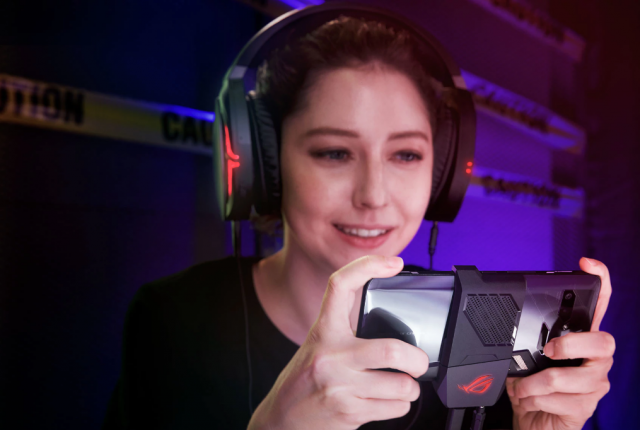 Asus launched ROG (Republic of Gamers) back in 2006 and the sole purpose of ROG has been to innovate the gaming industry. At first, ROG created powerful motherboards which helped tech companies create premium gaming laptops. However, ROG realized that the mobile gaming industry needs to evolve and created the ROG Phone.

The first thing we need to mention about this new smartphone is that it runs on Google’s Android operating system and that it is fueled by special Snapdragon-made silicon which helps cool down the device and keep the framerates up. The smartphone features impressive looking HDR graphics and an immersive mobile gaming experience that is paired with AirTriggers.

One of the most important features that the ROG Phone has to offer is its 6-inch display. The special thing about this display is not just the fact that it’s big in size, but also that it refreshes at 90Hz which makes it possible to feature faster framers than all other gaming smartphones available on the market right now. In addition, the high refresh display has been optimized to not suffer from slower pixel transitions as some other smartphones do.

While HDR support will provide users with dynamic range that makes the gaming experience more immersive, the most impressive thing about the display is that it offers a 10,000:1 contrast ratio which makes images look incredible.

Considering that the ROG Phone is targeted towards people who enjoy playing mobile games, no one should be shocked to find out that the smartphone comes with a high-end display that is 10-point touchscreen sensitive. This means that the display can track input even through gloves!

Moreover, the smartphone comes equipped with a pair of special AirTriggers. These triggers feature ultrasonic buttons that respond to 20 grams of force. Thus players can action them by their reflexes and don’t actually need to push on them. ROG Phone will feature two AirTriggers on the left edge and one more near the bottom right corner.

The coolest thing about these special triggers is that they can be customized to take care of different tasks, such as executing macros for in-game actions and gestures. In addition, the triggers will prove to be useful for non-gaming tasks such as using the smartphone in the one-handed mode.

Another important thing that we need to mention about the triggers is that they also clear up the display because users will keep their hands on them and not on the display itself. Also, the triggers feature vibrations for better force feedback in games such as FPS shooters.

Even though the ROG Phone is designed for people who enjoy mobile gaming, power users will also find it suitable to their needs. The smartphone is packed with a cutting edge processor and 8GB of RAM which means that it can take care of all types of heavy duty tasks starting with video rendering and ending with multi-tasking.

The 512GB internal storage space and fast USF 2.1 storage software which combined with a high 18:9 aspect ratio and luxurious graphics quality also makes the ROG Phone ideal for power users. Nonetheless, the smartphone is a gaming beast and there’s no doubt about that.