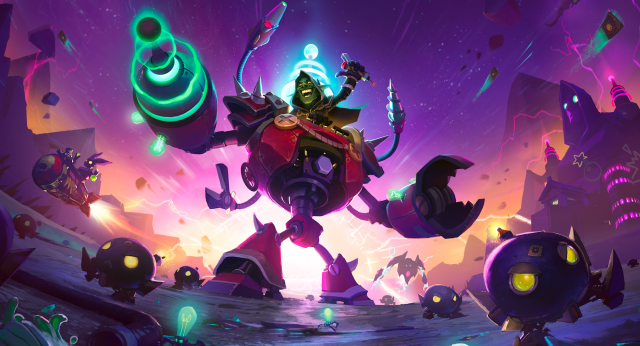 Hearthstone fans should be happy to know that Blizzard has unveiled “The Boomsday Project” which is the card game’s ninth expansion since it was released back in 2014. Blizzard revealed that the expansion will introduce 135 new cards and that it will be focused on Goblins.

Blizzard’s developers love to make “inside jokes” and this can be seen in the new expansion’s title as well. For those who don’t know, The Boomsday Project is referencing Dr. Boom who is a character and legendary card from the first Hearthstone DLC “Goblins vs Gnomes”.

Talking about “Goblins vs Gnomes”, the new expansion will follow the same style and it will focus on mechs. Therefore, Hearthstone fans should get ready to see some huge explosions and incredible visual effects when the new expansion rolls out.

We should also mention that The Boomsday Project expansion is available for pre-order right now and it comes with a 50-card pack bundle. The bundle contains special items such as the Mecha-Jaraxxus card back.

Not just that, but Blizzard is also offering an 80-card bundle that includes the newly introduced Mecha-Jaraxxus as the new Warlock hero picture

Every new Hearthstone expansion added a new ability, and The Boomsday Project introduces magnetism. Therefore, Hearthstone fans will be able to fuse different types of mechs together and create powerful robots.

As you would expect from a new expansion, The Boomsday Project comes with a bunch of Legendary cards. Blizzard has yet to unveil the full set of Legendary cards that Hearthstone fans will get to acquire, but we do know that Electra Stormsurge and Myra’s Unstable Element are going to be two of them. Nonetheless, readers can check out the announcement video down below.