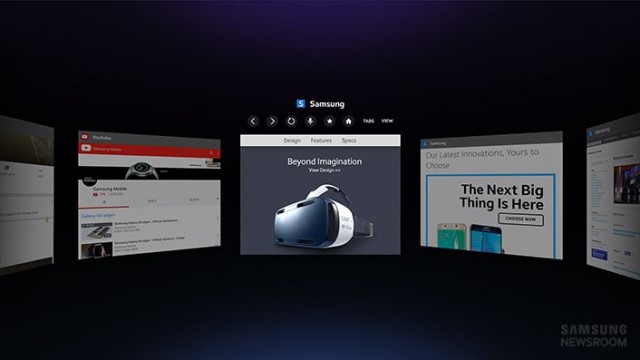 Samsung Gear VR, virtual reality glasses from the Korean developer, now has its own browser.

Virtual reality gear, the VR kit, was developed by the Korean manufacturer in a collaboration with Oculus and was officially launched a few weeks ago. As they state, the device only works with the best Samsung smartphones: Galaxy S6, S6 Edge, S6 Edge+, Galaxy Note 5 and Note 4. The high resolution of the displays on these devices is used to create a stereoscopic image that is taken over by the glasses and transformed into a “three-dimensional environment.”

Now, shortly after launching the glasses, Samsung already introduces a new feature for Gear VR in the form of a browser, called Samsung Internet for Gear VR and it supports voice commands for navigating on the Internet as easy as possible. Also, in the screenshots provided, it appears that the browser will also have a keyboard, but it is unclear how you can control it.

It may be used in parallel with the “Gaze” function, by which a persons can open a site by focuses its gaze on it. Of course, for now, the Internet does not contain a wide variety of 3D content, so you will not be able to use the glasses at full capacity in most cases.

The main improvement that new Gear VR brings, when compared with the previous version, is related to the degree of comfort that your device provides when used. It is about 20% lighter than before, and the section that is in contact with the user’s skin now includes a soft lining.