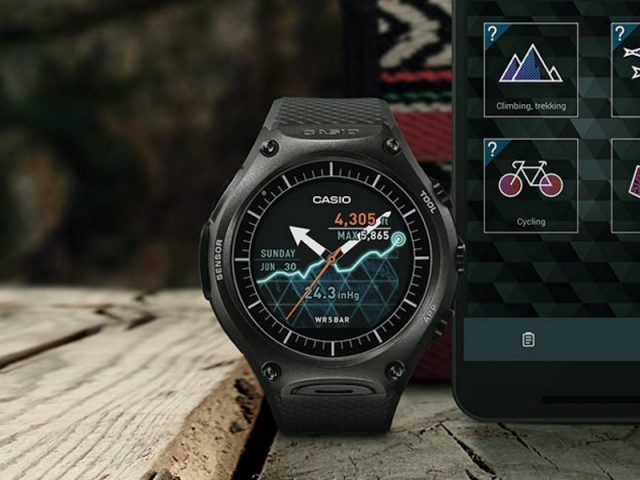 If you have ever studied advanced science or even basic mathematics in your life, there are chances that you have definitely come across the company Casio. Casio has been known worldwide for their calculators and precision watches. The company has also released many digital watches with calculators. However, Casio has now decided to move on the gen-next of their devices – as the company heads forward towards the direction of progress and launches the Casio Smart Outdoor Watch at the CES 2016.

The CES 2016 has already witnessed many smart watches being launched, we aren’t even 2 days into the event! There have been so many releases which have been happening at the Pre-CES shows, and companies have been making major announcements, showing off all they’ve got in all their glory. Casio Smart Outdoor Watch runs on the Android Wear system, and has been branded as the ‘WSD-F10’ model. The device comes with a microphone, and is water resistant up to 50 meters! Casio has said that the watch can be comfortably used in rain or water. When it comes to outdoor performance, the device is quite a beast, as it has been tested as per Military Standard MIL-STD-810 issued by the US Department of Defence. The Casio Smart Outdoor Watch can withstand shocks and vibrations.

As per reports, the watch comes pre-installed with some necessary apps such as RunKeeper, ViewRanger and MyRadar. The Casio Smart Outdoor Watch can measure air and altitude, and encompasses accelerometer, gyroscope, and compass sensors.

The device comes with a 1.32 inched circular LCD display, and offers monochrome as well as color modes. The monochrome mode takes the battery life from one day to as much as one month!  It supports all devices running Android OS 4.3+ and iPhone 5+

The company had already announced earlier last year that they were working on the watch. It didn’t come as an unannounced surprise, but such a military level precision was not expected from it. Casio has created one of the toughest smartwatches in the current day industries. The device is expected to be priced in at around $500 and will come in red, black and green variants.

What are your opinions on this beast of a device? comment below and let us know!