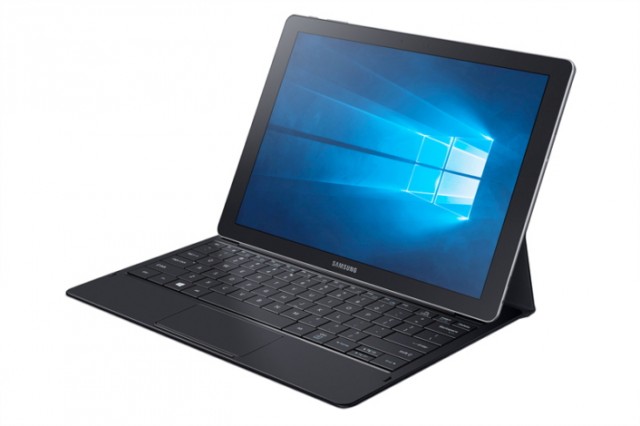 With a design concept and a detachable keyboard that is reminiscent of Microsoft Surface, Samsung has managed to bring a Windows hybrid system at CES 2016 that deserves attention.

Pictured above, it manages to fit in just 693 grams and is just 6.3 millimeters at the thickest point. However, the interior has an x86 processor from Intel, being a next-generation Intel Core M with a TPD of 4,5W, which is not said to be very nimble. Passing over its strikingly compact design, chances are very high that you will be impressed by the picture offered by this hybrid, because of the 12-inch Super AMOLED screen with a native resolution of 2160 x 1440 pixels. Even for Samsung, if I’m not mistaken, it could be the first portable system equipped with such a screen.

In terms of performance, at least momentarily, it seems that the new Samsung Galaxy TabPro S will be available in a single hardware configuration. On the specification list we will find a 6th generation Intel Core M clocked at 2.2GHz and 4GB RAM, all helped by a 128GB SSD. Optionally, for only 3 grams added to the weight of the system, you can opt for an LTE Cat 6 modem for high speed mobile connections. The latter could be one of the modems embedded in top smartphones developed by the South Korean company.

The cover with keyboard functions as dock that transforms the tablet into a laptop and connects to it through a system of two very strong magnets. As expected, the time for tests is very low and may require an adjustment period. In terms of connection, as in the case of the new MacBooks from Apple, it includes a single Type-C USB port which, through adapters, can get you more standard USB ports, video output, network and many others.

Basically oriented to productivity, there is currently no official price for the new Samsung Galaxy TabPro S, although it should not take very long for it to be made public.