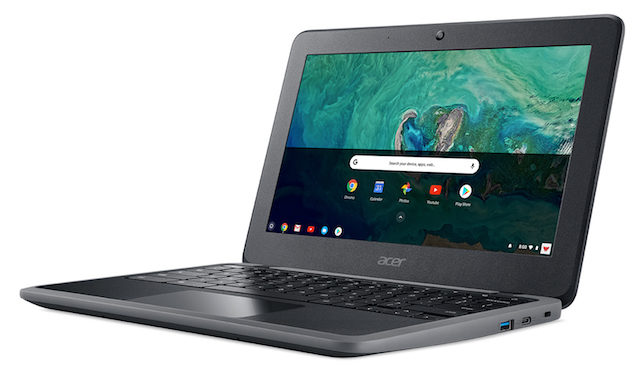 It appears to be the Chromebook season, as Acer unveils two new Chromebook laptops: Spin 11 and Chromebook 11 C732 and one Chromebox called the CXI3. All three are budget-friendly products intended for average consumers and the latter two for the education and enterprise markets in particular. The trio supports Google Play, so they all can run Android apps.

The announced was made at the UK’s Bett IT conference in London, which was followed by new reveals by Microsoft introducing Windows 10 Lenovo and JP with prices that vary between $189 and $300.

The new Chromebook Spin 11 which is rivaling the premium GooglePixelBook, has a convertible design with a 360 degree hinge which gives you four usage modes. It has an improved battery life which is supposed to last 10 hours, features two USB-C connectivity ports that can be used for charging and transferring data at up to 5GBps two USB 3.0 ports and a microSD reader. If it sounds familiar to you it might be because this model is actually an update of the Acer notebook launched last year at Bett.

Spin 11 also has an 11.6-inch touchscreen display at a resolution of only 1366×768 which makes it similar to a smaller MacBook Air and it brings a bundled Wacom stylus which usually more expensive laptops include, such as: Samsung Chromebook Pro and Google PixelBook.

The company has also shown off the new Chromebook 11 C732,  a sturdy laptop, with a  simple and finless design and durable build which offers IP41-rated resistance against water dripping and object intrusion and U.S. MIL-STD 810G military standard compliance with ruggedness which ensures quality and reliability. It is available to education customers and it comes with 4G LTE connectivity and offers the same ports as Chromebook Spin 11. It has a foldable to 180 degrees touchscreen display but also has a non-touch display with a resolution of 1366×768.

The Chromebox CXI3 targets the same audience as Chromebook 11 C732, with a slim profile that can be attached right to the back of a monitor or can be placed on its own stand for vertical orientation. It can be configured with up to the 8th generation Core processor.

The Chromebook Spin 11 will be priced as low as $349 and could be purchased in March.

Acer hasn’t offered an official price and availability info for Chrombox CXl3 yet.