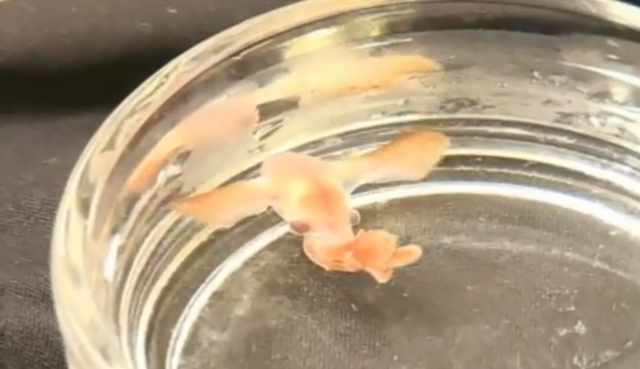 According to Health ThoroughFare, The Dumbo octopus is a tiny creature that grows white pearls and gives itself strength to live through the cold water with the help of eight muscular arms and two gigantic flapping ears. You guess right, because of the ears, this octopus is called Dumbo. It looks the same as its parents, only smaller.

We first heard of this creature in 2005 when a research was conduct. We learned then that, at only just 10 minutes from hatching, the baby octopus started to behave like a grown one – it could already swim, detect chemicals and survey its environment. In addition to this, its arms were a good tool for catching prey.

Comparison with “bumpy balls of chocolate”?

There were once seen some “bumpy balls of chocolate”, which was seen at almost 8,000 feet below the surface, clinging to a coral. Well, this is a cute image to have in mind. After some research done, the balls of chocolate were actually egg cases. It seems that the first 2 were broken and empty, and the next 2 were full of “white jelly”. The 5th one was the special one though because it started to crack and it was apparently full of something. That’s how Dumbo appeared.

It swam with the help of its huge ear flaps- each just as large as its little body- which he kept waving. It swam in a small dish, bumping into the glass from time to time. The hatchling bore a sac which was full of rich yolk, thing that will help the tiny octo to feed itself until it finds out how to do it by itself.

There are different species of Dumbo octopuses

There are 14 species of Dumbo octopuses. Grimpoteuthis is one of them, but there are not many pieces of information regarding this subject. They stay in the darkness of the ocean, where you cannot see or reach them. Not many specimens have been caught, and little of their DNA has actually been sequenced. This is one of the reasons why the specialist couldn’t actually decide what kind of species it is for sure.