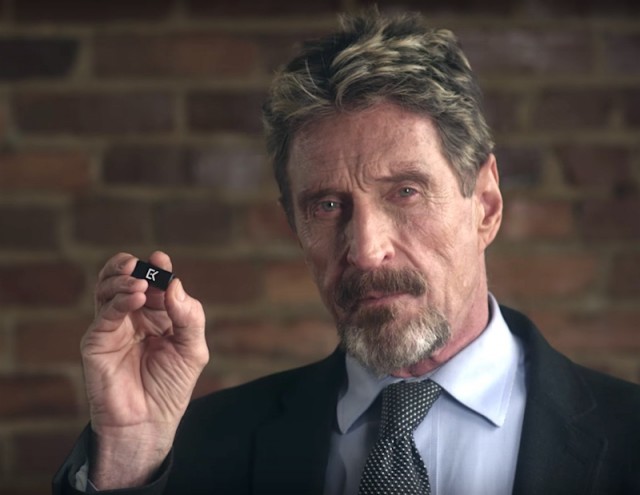 In the age of Information Technology, the importance of social media has increased. With more and more social networking websites, applications etc. it is getting hard to keep track of all the different passwords. Keeping one same password for everything is always dangerous. A password manager comes to mind in these times of confusion, but then again sometimes even the password manager can get hacked.

The founder of the very famous security firm McAfee, John McAfee who is also an entrepreneur has come up with the solution to the multiple password problems. The solution’s name is Everykey.

Everykey is a small gadget which will offer you to unlock your phone, your accounts and even smart doors; in return you just need to carry this ground breaking product. In a blog post written by the man himself John McAfee expressed “This is a f**king game changer!!” Last year, the device ran a Kickstarter and it is worth mentioning that in it, the device raised more than $120,000 it was then that McAfee became its chief manufacturer. Then a campaign was run on the crowdsourcing platform Indiegogo, by MaCafee the last date to accept your order will be 10th January. As writing this more than $ 70,000 has been received by Everykey to its original launch goal which was $ 20,000.

Everykey can support the likes of Windows, OS X, Linux, Android and iOS (which requires jailbreaking). Being OS friendly makes this device more desirable. The way in which Everykey works is when the device is brought into the proximity of a device which is 3 meters or under, it will automatically unlock it, then be it your smartphone or your account or even your computer, what’s interesting is that when you walk away, Everykey will automatically lock the device too.

Everykey is expected to go under production in late January and the device will start shipping to early adopters and backers in February. The early adopters have got the gadget at the price of $ 128 which will include the shipping expense, a key ring and a charging cable.

McAfee stated that they have built the device with military grade encryption and has given safety features like if the Everykey gets stolen then you will have the ability to freeze it remotely.

What are your thoughts on this amazing life-changing gadget? Comment below and let us know.