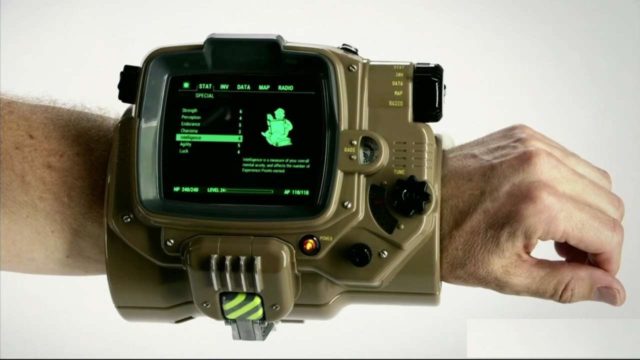 The Game of the Year Edition of Fallout 4 is now available for purchase. This new version of Fallout 4 costs $60 and it includes every DLC available. However, North American residents can purchase the game for $100 and receive something truly special. Not only will they get access to the Nuka-World, Far Harbor, Wasteland Workshop, Automatron, Vault-Tec Workshop and Contraptions Workshop DLCs, but they will also receive a life size Pip-Boy replica.

We think it’s safe to say that everyone who played any of the Fallout games wishes to own a Pip-Boy in real life. Fortunately for North American residents, they can get a real-life wearable Pip-Boy replica bundled with their Fallout 4 GOTY edition.

Things get even better since this is not just a replica because it also features a smartphone slot. Although, we need to mention that this is the same Pip-Boy replica which was sold back in 2015 when the game was first launched. Therefore, newer and bigger smartphones such as Apple’s iPhone 7 Plus will not fit.

Bethesda is the company behind the Fallout franchise and as everyone already knows, Bethesda likes to launch all its games cross platform. Therefore, the GOTY Edition of Fallout 4 is available on Xbox One, PlayStation 4 and PC.

Even though it might sound like this GOTY Edition is the last version of Fallout 4 that will ever come out, this couldn’t be more far away than the truth. Bethesda announced last year that it’s working on a new VR take on Fallout 4 which is going to run on HTC Vive.

The VR game even has a release date and that’s December 12th. With that being said, it’s safe to assume that Fallout 4 fans will be busy during the upcoming months.