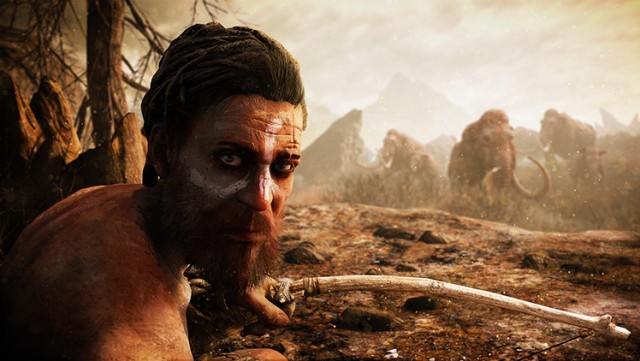 Far Cry Series waive firearms in favor of spears and arrows. As we’ve seen a while ago, Far Cry Primal will take players back to the Stone Age, a time in which man does not enjoy the security he enjoys today. Takkar, the character that you play in game, is the only survivor of an ambush on his group.

Within the game, you will not only fight rival groups, but also large animals, and under this circumstance, fire becomes a basic tool, especially at night. Among the animals you will face are mammoths and tigers, but, also hunters from rival groups and they will be a hindrance in your attempt to reunite the tribe.

Like any respectable hunter of that time, Takkar is able to create tools and weapons using the bones of hunted animals and resources he gathers in the wild. Obviously, those will be necessary not only in fights with predators, but also to keep the group safe, thus guaranteeing development.

More interestingly, through a recently released video, Ubisoft shows that animals can be tamed. Gamers at Polygon tested the game and could choose from three different animals during fights, a bear, a leopard or a wolf. Apparently, you can not use more than one animal at the same time, each of them offering unique advantages. The bear, for example, has very high strength and can attract enemy attacks, while the leopard can perform silent attacks on the isolated enemies, without attracting the attention of the group.

Moreover, Takkar could even call an owl that will perform reconnaissance flights. In some situations, for example, a tamed wolf begins to bustle. At that moment, you know your enemies are nearby and you can use the owl to see what awaits you.

To tame animals, the player requires a certain skill and until you get it, you will only be using your own weapons during the fighting. Wolves, bears and leopards can be used to hunt and the animals you kill can then be skinned to obtain extra resources. From this point of view, the game reminds us of Assassin’s Creed III. The game will be released on February 23, 2016, when is expected to debut on Playstation 4, Xbox One and PC.