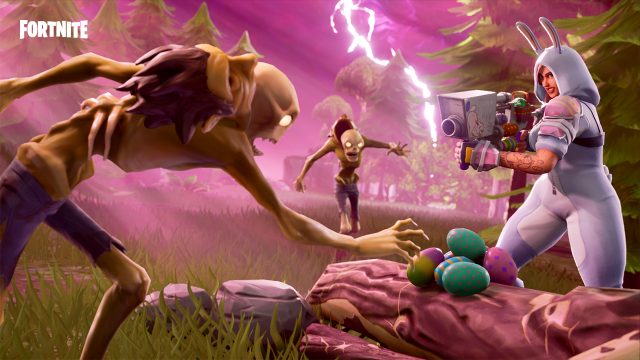 Powerful and mighty, the newly released Guided Missile can devastate targets. Complete control right at your fingertips. Skilled players can take advantage of its range and maneuverability to get around cover and land the final blow on their opponent.

This update delivers several highly requested quality-of-life improvements to Save the World such as the introduction of Combat Pro control scheme and removal of Energy from sprinting.

Hop around, you’ll be sure to find lots of Easter Eggs… happy hunting!”

Fortnite: Battle Royale got another update from Epic Games! This time it is the v3.4 patch, which removes the FPS cap for Xbox One players, introduces new weapons and a limited time game mode! Let’s check it out, shall we?

Improvements have been made to the Xbox One version that make it so the 30 FPS cap is no longer necessary, so it has been removed! Xbox One players can now enjoy the game in glorious 60 FPS!

“In v3.4 we made some significant GPU optimizations which improved visual quality, including resolution in 60 FPS mode, and we now feel there is very little reason to play at 30 FPS.”

Gameplay received some new additions too. Patch 3.4 adds the Guided Missile weapon to the game. It uses rocket ammo, does tons of damage and you can only find it as treasure chest or supply drop loot, in epic & legendary form. It works almost like the rocket launcher, but better, because you can control where the rocket lands!

This patch also marks the re-introduction of the Boogie Bomb, after the inventory dupe bug related to the bomb got fixed.

Another limited time game mode has been introduced in this patch and also Sniper Shootout is back in the game, except now there is no revolver; you can however use a crossbow or a hunting rifle. Sharpen your sniping skills in this new game mode!

Of course, a bunch of stuff has been fixed, improved and/or optimized, so if you want even more details you can go over to Epic Games’ blog and check out the full changelog!

Are you excited for the new patch! Tell us in the comments! And as always, stay tuned for more Fortnite news!