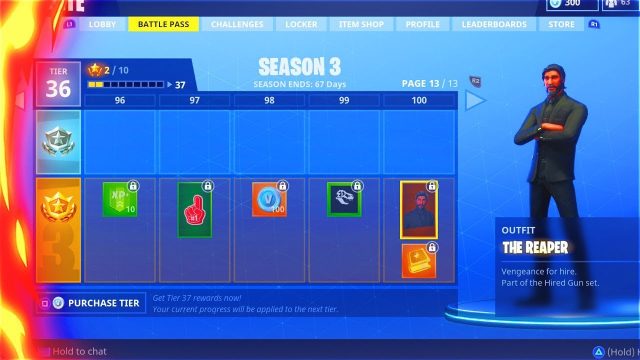 The most talked about thing in the Fortnite community is the shiny object in the sky. No one knows what it actually is but if one thing is certain, it must have something to do with season 4. The main theory is that the shiny object that’s floating in the sky above the famous “Tilted Towers” region is a meteor that’s going to blow the map away.

Nonetheless, what we can take from this is that season 3 is coming to an end and players need to rush if they want to hit tier 100 before that happens.

The coolest thing about hitting tier 100 is having the bragging rights. Who wouldn’t want to brag to their friends about reaching the highest level in the game? However, that’s not all that hitting 100 tier brings. Players who grind their way to tier 100 will find that they can get their hands on the Reaper skin.

The skin is not too spectacular and in fact, it kind of pales in comparison with some of the other premium skins. Although, there is something special about this skin. If you take a closer look at it, you will be able to see that it resemblances John Wick, the high skilled assassin that Keanu Reeves plays.

With that being said, we can be sure that everyone wants to hit tier 100 before season 4 arrives. The question that remains, what is the fastest and best way to do that? Sadly, the answer to that question is to pay money.

On the bright side of things, players can choose to not spend any money and hit tier 100 by completing challenges. Therefore, today we are going to present readers with the best challenges that they can complete in hopes of maxing out their level before the new season arrives.

Not everyone is a good shot and there’s no reason to be ashamed by that. This is why we are going to give readers a tip on how to complete their combat challenges without having to grind too much. Players can always switch to the mobile version of Fortnite and they will find that the competition is not that fierce there. Another tip is to use the shotgun while in the mobile version because its super effective in close range and aiming at long ranges is difficult while mobile.

Fortnite does a great job of keeping the game fresh for players. Despite using the same map for months on end, the game remains entertaining because of the daily challenges that Epic Games introduces. These challenges give nice rewards and completing them is a great way of hitting tier 100.