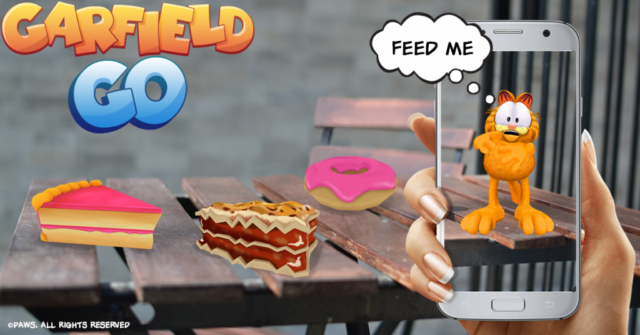 It’s no secret that Pokemon Go caused true excitement-fueled chaos last summer when it came out officially. Not many games have managed to reach that level of public pandemonium both prior and following their launch, so hats off to Niantic for that. However, the game’s tremendous popularity also means that there will also be attempts at creating knock-offs of it, and some of them end up being actually terrifying.

One apparent Pokemon Go knock-off seemed to be Garfield Go, a mobile game that follows the exact same real world map concept, but instead of a Pokemon trainer, you’re Garfield, everyone’s favorite fat orange tomcat that loves sleeping and eating lasagna as much as he hates Mondays. However, Garfield Go is an actual, legit licensed game that has a different aim altogether, although it’s based around the same game structure as Niantic’s Pokemon Go.

Much like when chasing Pokemon in Pokemon Go, with Garfield Go you also have to go out into the real world, walk around and explore in order to find items and do various things. But Garfield Go is more like a treasure hunt than anything else. You find hats, comics and, of course, lasagna. The items you find around the town serve various purposes, but they are essentially part of the same big treasure hunt.

However, Garfield Go is far inferior to Pokemon Go as far as graphics and augmented reality optimization goes. In fact, it looks kind of shoddy and rushed, but it’s still great fun if you or your child are fans of Garfield. And, let’s be real, who doesn’t like Garfield? While this game certainly won’t reach Pokemon Go levels of popularity, it does have the odd chance of becoming a cult favorite among some niche groups.