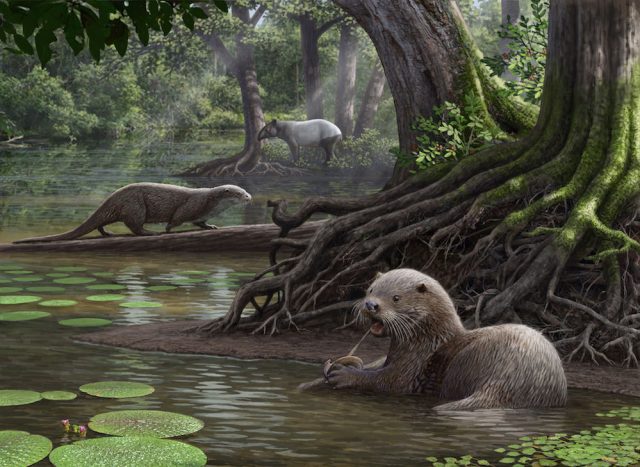 When someone thinks of an otter, the first thing that comes to their mind is a cute and cuddly animal, well this wasn’t always the case. Around 6.2 million years ago a big and strong otter species roamed around China’s swamps. Reports are showing that this otter species was really big weighing at 110 lbs (50 kg) resembling a wolf in size, and they were really fearsome having big heads and powerful jaws.

Studies are pointing out that this otter species is the largest one to ever live and they are about four times the size normal otters are today. Xioaming Wang which is a curator of vertebrate paleontology that works at Los Angeles’s Natural Museum stated that “This extinct otter is larger than all living otters”.

The first remains of this huge species were discovered back in 2010 when a team of US and Chinese researches dug up an almost complete skull in the Shuitangba quarry which can be found in South China. Seeing the skull, the researchers knew that they have stumbled upon something truly special. The scientists had quite a tough time trying to pierce the skull because it was coated with a soft brown coal. Additionally, to make things even worse the skull was broken into pieces just like a puzzle.

The scientists quickly went to a special lab that was equipped with a computed tomography (CT) scanner and then took the scanned images over to a maxillofacial radiology doctor in Los Angeles. The doctor then went on and mounted all the pieces together just like a puzzle, the difference being that he did everything by mouse and not by hand.

While analyzing the fossils, the scientists were able to find out that this old otter species was in fact a member of an ancient otter lineage. This otter lineage dates back to 18 million years ago and they were badger-like animals which were found in Europe. Leaving everything aside, we can only imagine how terrific it must have been to live near to one of these swamps that were inhabited by these large otters, or how awesome it must have been.