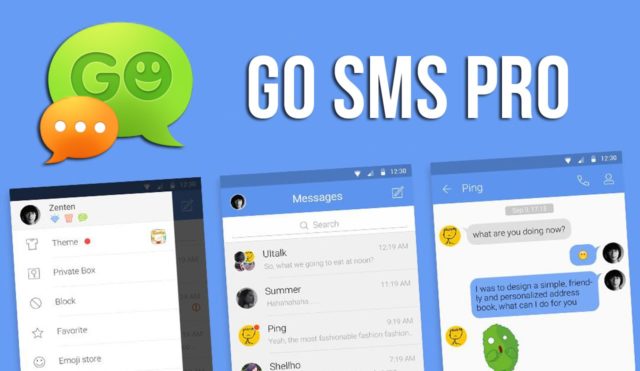 The reason why Android powered smartphones are so popular is because Google’s operating system is packed with tons of innovative features such as the Camera App, Multi-Windowed Mode and so on.

However, there’s another thing that helps Android smartphones shine over Apple’s iOS. Unlike iOS, Android gives users the ability to customize nearly everything in the operating system thus making the smartphone feel more personal.

A great example of this is GO SMS Pro which replaces the stock Android messaging app. GO SMS Pro holds the title of being the “all time #1 messaging app” and it has an active user base of over 100 million. This app is equipped with many cool features such as stickers, popup windows, cool themes and even a private box among others.

The latest update for GO SMS Pro brings the app’s version up to 7.41 and its available for download right now. The update is available in form of APK (Android Package Kit) which means that users can manually download it and get their hands on it ahead of the public release. Moreover, the update weighs in at 20MB and it can only be installed on Android 4.0 Ice Cream Sandwich operating system or higher.

Let’s go over some key features that GO SMS Pro offers so that we can get an idea of what it can do. First off, SMS GO Pro excels when it comes to customization because it features hundreds of themes and stickers which keep increasing.

SMS GO Pro is also great for enhancing security because it features a private box which automatically encrypts text messages thus giving them another layer of protection. Another cool feature that helped GO SMS Pro get so popular is its SMS Blocker. This feature uses keywords to ban or block spam messages.