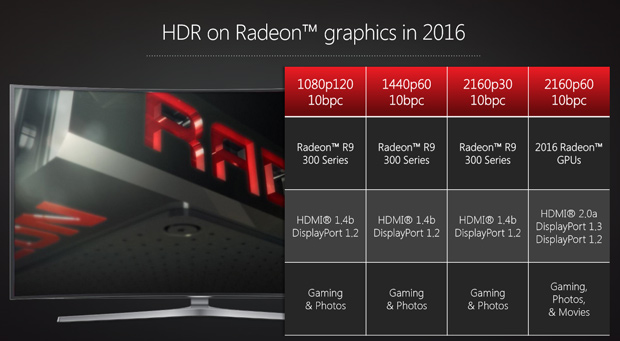 AMD has made an interesting disclosure opposite the Radeon video cards that will launch in 2016. The new features will not however be useful to all users.

Many of us have learned to ignore completely different versions of HDMI or DisplayPort. There are major discrepancies between them, and AMD has just announced that future GPUs that will reach users in 2016 will be introduced with HDMI 2.0a connectors and DisplayPort 1.3 new standard together without exception. Mainly, these will be useful for gamers and enthusiasts for people working in design or architecture that need as many pixels as possible on the screen.

The basic idea is the following. DisplayPort has evolved significantly in recent years and, although it has not changed its shape, became much smarter from one iteration to the next. A DisplayPort 1.2 port, for example, can push content to a display at a resolution of 3840 x 2160 pixels with a 60Hz refresh rate. If you want a higher refresh rate for the monitor, the on DisplayPort 1.2 there were resolution compromises, users were forced to descend to 100/120 Hz up to 2560 x 1440 or 1920 x 1080 pixels. The new DisplayPort 1.3 standard completely eliminates the restriction detailed above 60Hz and can send video content to a compatible panel at a very generous resolution of 7680 x 4320 pixels. Whether or not you need such a resolution is another story. However, given that such a video card should be an investment over several years, different values ​​might no longer seem as absurd.

In a market where desktops are beginning to be used increasingly rarely and almost exclusively in professional environments, the AMD intention is commendable. In addition, it should be seen, rather, as an alignment to market demands than a fad.