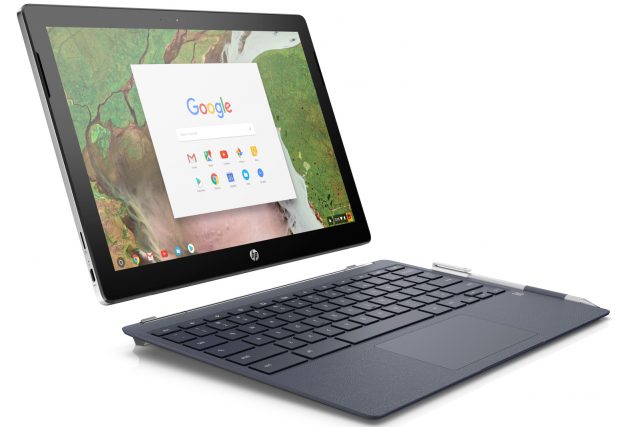 With just a couple of weeks ago, Acer announced its first tablet powered by Chrome OS and now is HP’s turn to announce its new Chromebook x2 which runs Chrome OS, as well.

HP Chromebook x2 is a 12.3-inch tablet with a keyboard dock and stylus support. It looks like Chromebook x2 challenges the Apple iPad Pro.

Besides, it comes with stereo speakers, a back camera of 13MP, a selfies camera of 5MP, 2 USB-C ports, 3.5 mm jack, and a MicroSD slot.

Also, the Chromebook x2 comes with a powerful battery with a 10.5 hours autonomy on normal usage.

Just to be clear, HP Chromebook x2 looks to be a good tablet in terms of specs and accessories. But it is not quite known yet how will Chrome OS run on a tablet with these specs.

Despite the fact that the configuration looks OK and the tablet’s design is like a hybrid of Pixelbook and Microsoft Surface, the biggest problem might come up due to the operating system, the Chrome OS.

Until now, Google has worked thoroughly to develop its OS to work well on touchscreen devices but Chrome OS is still much more of an operating system for desktop PCs.

It will be interesting to see how Chrome OS behaves on a tablet.

HP Chromebook x2 will be launched in June but, most probably, we’ll get more tablets running Chrome OS by then.

HP Chromebook x2 will be sold for $599 for its standard version and will come with the keyboard dock and the stylus.

In comparison to iPad Pro, which is sold for $1,067 for the full box which includes the tablet, the keyboard dock, and the stylus, the HP Chromebook x2 running Chrome OS is way cheaper.