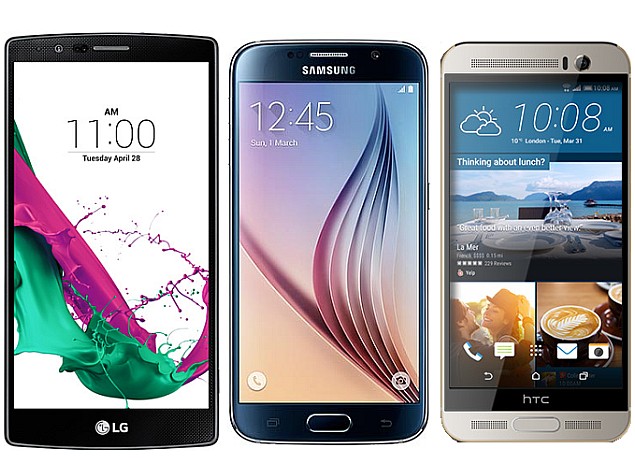 In the top smartphone segment with Android, LG G4 entered the scene confronting HTC One M9 and Samsung Galaxy S6.

Samsung has undergone a radical change of design, HTC has tried to mend its camera issues, while LG relies on a similar version of the G3, but comes with some important news in several chapters where the competition has fallen behind.

All these factors make it a difficult task to choose the best phone for your needs, but in this article we try to explain the main advantages and disadvantages of each model.

Samsung Galaxy S6 is the only phone in this comparison that has adopted a different philosophy in terms of design compared to its predecessor. The plastic was left aside to make way for glass panels on the front and rear which are joined in a metal frame, features that make the phone look better.

Instead, HTC One M9 and LG G4 design borrows a lot from its predecessors HTC One M8, respectively, LG G3. This is not necessarily a bad thing, since both enjoy an elegant design and are appreciated by users, but on the other hand, no changes is precisely what may lead to unhappy users. To attend this problem, LG G4 has the option to use a rear leather casing, but you have to pay extra for it.

All three producers continued last years trend regarding the screens, so we have three technologies, three diagonals and two resolutions. However, each device provides top quality. LG G4’s TrueHD IPS display relies on a 5.5″ diagonal and a 2560 × 1440 pixels resolution (QHD), which provides natural colors and good viewing angles, but may be considered too large for some users. Galaxy S6 comes with a 5.1″ SuperAMOLED screen with the same resolution, while HTC has a 5″ SuperLCD 3 Full HD screen.

If all phones in the recent past relied on the same top chipset from Qualcomm, now things have changed. HTC One M9 relies on Snapdragon 810, the most powerful chipset developed by Qualcomm, while Samsung Galaxy S6 has developed its own chipset,the Exynos 7420. Both chipsets use the same quad-core processors provided by ARM, but the Galaxy S6 is built with the 14 mm technology, which provides better energy saving and autonomy than the 22 mm manufacturing technology used by Qualcomm.

Meanwhile, LG chose a middle solution represented by Snapdragon 808, the second most powerful Qualcomm chipset in order to avoid heating problems which characterize Snapdragon 810. All three phones come with 3 GB RAM, which should ensure a smooth running of the Android operating system into any application or game. In addition, all models have at least 32 GB of internal memory, but Galaxy S6 has no slot for microSD memory cards.

Samsung Galaxy S6, HTC One M9 and LG G4 each one of them has advantages and disadvantages, which is why we can not determine a winner for sure. Instead, according to the needs that you currently have, you can turn to one of the three models that suits you better.