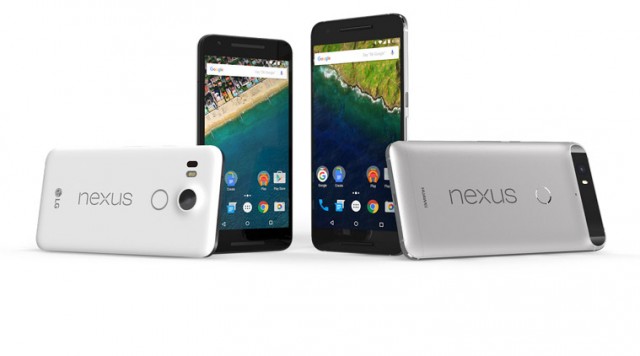 Google presented 2 top smartphone from the Nexus family. The first one is built by LG and named Nexus5X, basically a follower the Nexus model five, also built by South Koreans.

The second is called Nexus 6P, Nexus is the first phone manufactured by Huawei in the same category with strong phablets from other manufacturers.

From the aesthetic point of view, the two phones are very similar, especially regarding the front dominated by the screen: the frames are thinner and the edges are rounded. The main difference in design is the placement of the camera: if the Nexus 5X sensor is positioned centrally, in the case of Nexus 6P we are dealing with a sensor placed sideways on top in an area that stands strongly emphasized through a protuberance which extends the full width of the phone. Both feature dual-LED flash.

Both phones are of unibody, but 6P Nexus Nexus is the first device with metal casing elements contributing to its premium appearance.

When you get into the details about the technical specifications you realize that differences are rather minor. Both terminals are in the top segment, but seem designed to target a more sensitive to price market.

The camera was one of the weaknesses of Nexus devices and is too early to know if things have changed in this area. We know that both phones feature a 12.3 MP sensor aperture F / 2.0 is capable of recording 4K video clips. The differences are the front camera: the smaller phone has 5 MP, and the larger device has 8MP.

The Nexus range of phones has been enriched with two top attractive phones, available for slightly lower prices than those offered by Samsung, HTC, Sony or Apple.

Therefore, if you are looking for a phone that provides a clean interface for Android, good performance and a decent price, not hurt you to take a look at the new Nexus 5X and Nexus 6P, depending on your preference for the screen size.