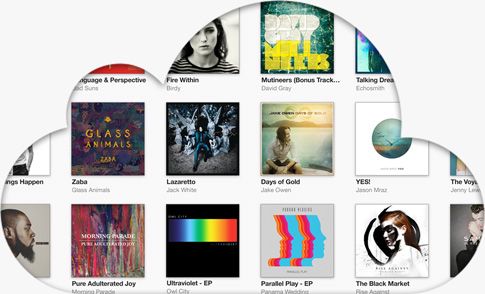 For a long time the number of songs that could be stored on iCloud was limited to 25.000 songs, now Apple has decided that it should increase this number three times more, finally reaching 100,000 songs that you can now store in the cloud.

Apple said that this possibility could be introduced in June and apparently kept its word. However Apple Music is not the only way to listen your music via the cloud from the American company. iTunes Match does almost the same thing, but with a small difference: it scans the music you already have in your phone or cloud, and if found on the official servers, your tracks will be played from there. If there are songs that are not available from official servers it will upload them in the cloud from your phone, but you will have to pay $ 25 a year in order to use this service.
Apple Music, however, will do exactly the same, but if you do not pay a sum of $ 10 a month, it will stop its services and you will not be able to play music from the cloud. In addition to being among the few companies that ask for money to play music from the cloud, iCloud Music Library offers a reduced number of tracks that could be stored on the company servers, compared with Google Play Music that offers up to 50,000 tracks, for example.

Other companies such as Microsoft’s Groove Music allow Microsoft customers to enjoy their music online completely free, and Amazon offers a number of barely 250 songs freely, but for an annual payment of $ 25, Amazon customers can enjoy a discography of 250,000 songs.