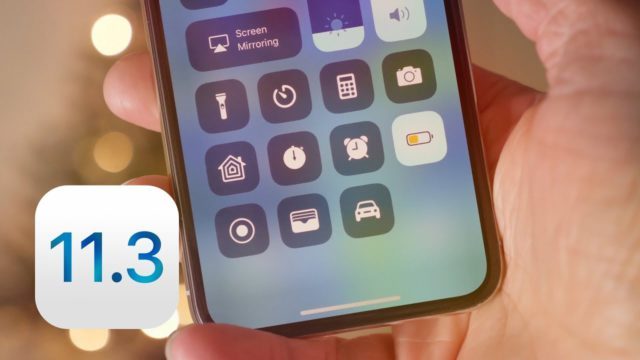 One week after the release of iOS 11.3 beta 4, registered developers and Public testers can download iOS 11.3 beta 5 for the iPhone, iPad or iPod touch.

The only thing different from iOS 11.3 beta 4 seems to be minor improvements and bug fixes to the OS. Apple has posted the same release notes as the ones from the previous beta release; as a reminder here they are:

Probably the biggest change in iOS 11.3 is the introduction of a bunch of options for enhancing battery life, which should cut down on the controversy about Apple throttling performance on older devices.

A new menu, “Battery Health” is added, which shows up under the “Battery” tab on iOS 11.3. There are two fields within this menu: Maximum Capacity and Peak Performance Capacity. Maximum Capacity, as the name implies, will show you how much maximum charge your phone can still hold out of the original amount, while Peak Performance Capacity will tell you whether the battery is throttling down your phone performance or not.

Therefore, you will be shown a reduced Maximum Capacity on older phones with old batteries inside. Also, if you have a weak battery plugged in, the Peak Performance Capability will tell you “This iPhone has experienced an unexpected shutdown because the battery was unable to deliver the necessary peak power. Performance management has been applied to help prevent this from happening again.” Of course, you have the option to disable this, should you wish to do so.

While more battery health transparency is great, there are other points of interest in this system update too. Namely, the next big thing brought by Apple: Animoji. While it’s true that we’ve seen new emoji in previous iOS updates, this update brings us 4 new animoji variants: a dragon, a skull, a lion and a bear. That would make 16 Animojis in total!

Also, as we’ve mentioned, iOS 11.3 beta also updates the proprietary augmented reality software, ARKit, to version 1.5. Now, the tool is able to work with vertical surfaces, rather than only with horizontal ones. It can recognize and place objects “in the world” and it can be aware of the positioning of objects like signs and posters. The developers say a possible use of this feature could be animating movie posters or maybe interactive museum exhibits. As a bonus, the camera can now auto-focus and has a ~50% greater resolution!

For anyone subscribed to the public beta channel, you can download the iOS 11.3 public beta 5 now! Go to Settings → General → Software Update and you will get a prompt to download & install. The update is 262MB in size.