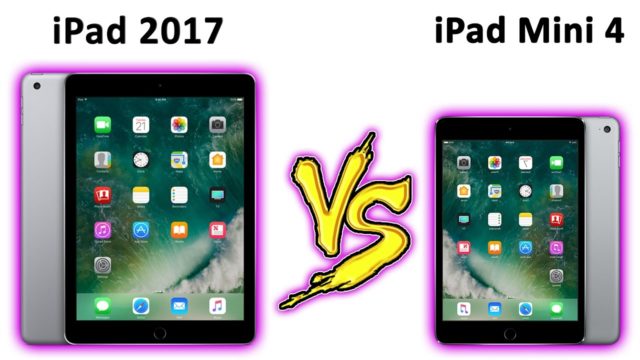 Apple took everyone by surprise when it shut down its online store for a couple hours. Everybody started rumoring that Apple is secretly wanting to introduce some new iPad models. However, as things turned out, Apple decided to only restock the iPad Mini 4 lineup while completely removing iPad Mini 2 from the store.

More than that, Apple also eliminated the “iPad Air” brand by replacing it with the new 9.7-inch tablet that’s simply known as “iPad”. With that said, today we are going to look at Apple’s new 2017 tablet lineup and compare them against each other.

Obviously, the biggest difference between these two tablets is their display size. iPad (2017) ships with a rather large 9.7-inches panel which features a high pixel resolution of 2048 x 1536 and a pixel density of 264ppi.

On the other hand, we have iPad Mini 4 which features a smaller 7.9-inches panel that offers an equal pixel resolution of 2048 x 1536 and a larger pixel density of 326 ppi because of its smaller size.

In terms of hardware power, iPad Mini 4 impresses us with its 64-bit A8 processor that’s coupled with a M8 graphics processing unit. The tablet’s hardware power is enhanced even further with the addition of 2GB of RAM.

iPad (2017) comes out gun blazing with a better 64-bit A9 processor that’s bundled with an M9 graphics processing unit. To make things even better, iPad (2017)’s processor is also paired with 2GB of RAM.

From the looks of it, iPad (2017) has the upper hand in this comparison. Although, this was to be expected since iPad (2017) is a little bit more expensive that iPad Mini 4 and it had to offer something better in return for that bigger price tag.