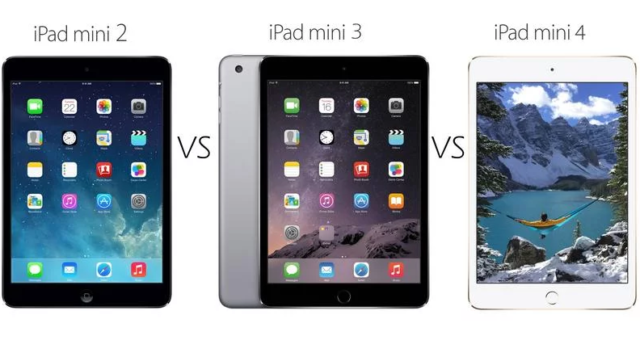 Even though Apple recently unveiled its new smartphone lineup, the Cupertino based tech giant has been quite silent when it comes tablets. Apple was expected to unveil at least one new Pro or Mini tablet during this year, but this didn’t happen. Instead, Apple decided to stick with iPad Mini 4, iPad mini 3 and the upgraded Mini 2.

Customer are always left confused when it comes to picking an iPad Mini device since they all look similar. However, today we are going to compare them against each other and see what sets them apart.

iPad Mini 3 and Mini 2 ship with the same 7.8-inches screen. This display uses LED-backlit IPS LCD technology and it offers a pixel resolution of 1536 x 2048 with a 4:3 ratio. Moreover, the display features oleophobic coating which enhances its durability.

On the other hand, we have iPad Mini 4 which ships with basically the same display. iPad Mini 4’s panel is also measured in at 7.9-inches and it offers the same pixel resolution. However, this tablet’s display features scratch-resistant glass alongside oleophobic coating.

Considering that we are talking about tablets which are more than often used for heavy duties, hardware performance is quite important. iPad Mini 3 and Mini 2 are fueled by Apple’s own-made A7 dual-core processor. This chipset clocks at 1.3GHz Cyclone and its coupled with a PowerVR G6430 GPU alongside 1GB of RAM.

iPad Mini 4 blows the other two tablets out of the water with its more advanced A8 processor. This chipset is also dual-core but it clocks at a faster speed of 1.5GHz Typhoon and its paired with a PowerVR GX6450 GPU and 2GB of RAM.

From the looks of it, the identical iPad Mini 2 and iPad Mini 3 are high-end devices but they pale in comparison with iPad Mini 4. Even though these three tablets are equals in terms of display, iPad Mini 4’s hardware power is way more impressive.