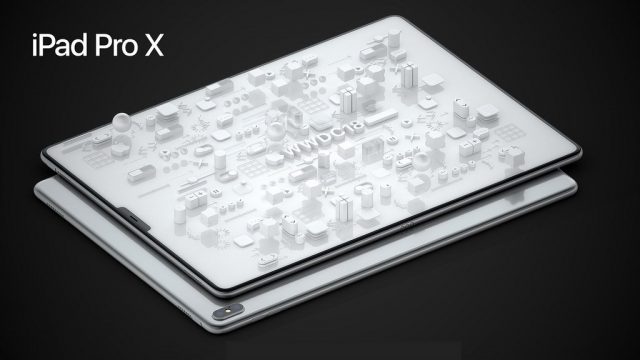 iPad Pro 2018 is expected to be presented by Apple on March 27 at a conference in Chicago. While many Apple fans are interested in finding out more about the new iPad Pro 2018 models, someone thought of making a concept of a tablet inspired by the iPhone X – The iPad Pro X Concept.

In the image from the beginning of the article, you can see an iPad Pro tablet with the same thin edges but smaller notch as an iPhone X.

Apple has already physically removed the iPhone button from iPhone series and will probably adopt the same strategy with the new iPad Pro 2018.

The absence of the home button, which typically hosts the fingerprint scanner, is a sign that Apple is going to use Face ID on its future tablets, which will later run a biometric measurement system.

Since that has been somehow admitted by Apple, we should expect that the next-generation iPad Pro 2018 will have a bigger display, getting more and more similar to iPhone X.

Also, the screen will pack the OLED technology.

For the iPad Pro 2018, it was reported that Apple will introduce a Bionic A11X chip, a variant of the A11 chip from iPhone X, iPhone 8, and iPhone 8 Plus.

Although many people would probably want to see an iPad Pro tablet with very thin edges of the screen, Apple is still unlikely to provide this feature because tablets would need thicker edges to be navigated smoothly when held in hands but even so, the iPad Pro X concept looks stunning and, who knows, the new iPad Pro 2018 could look similar.