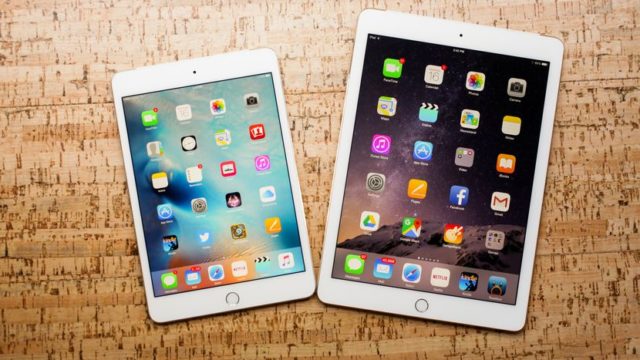 This year, in March, Apple closed their online store and a lot of people hoped they would introduce new iPad models. But it wasn’t so, not even updates on iPad Pro appeared. Instead, they added more storage on the iPad Mini 4 and got rid of the Mini 2 version.

They also replaced iPad Air with an iPad tablet. So now you can find only four devices in the Apple Store when you search for a tablet: iPad Mini 4 with a 7.9 inch Display, iPad with a 9.7 inch Display, iPad Pro which comes in two sizes: 9.7 and 12.9 inches.

We decided to compare the latest ones that were announced: the iPad and the iPad Mini 4.

When we look at the devices we notice a similar design, with a difference in size (iPad Mini 4 – 7.9 inch, iPad 9.7 inch). Also, the iPad Mini 4 is thinner by 1.4 mm. Both devices have aluminum bodies and can be purchased in different colors: Gold, Space Gray, or Silver.

They both have 2 GB RAM and the same frontal and rear cameras.

In the matter of processors, they differ from 64-bit A9 and M9 (iPad) to 64-bit A8 and M8 (iPad Mini 4). The A9 processor makes the iPad a little more powerful and noticeable when playing games or using different apps which require a faster processing.

The displays are different sizes: the iPad is 9.7 inches and the Mini 4 is 7.9 inches but they both have the same resolution (2048×1536 pixels), the Mini 4 as more pixels per inch due to the smaller display size but not noticeable.

The prices concerning these two iPads are not very different (iPad Mini 4 in all its versions is only £ 10 cheaper than the versions of iPad).

As a conclusion to this comparison, we would say that if you want to get an iPad and can’t decide what’s best; choose one which will appeal to your needs. For example, if you use a tablet for playing casual games, browsing the web, check Facebook, e-mail, see videos or even read an e-book and so on, you can choose the iPad Mini 4 and put it in your bag.

If you are more of a content creator or an iOS gamer and need a larger screen for graphic details and a faster reaction, you’d better opt for the iPad. The iPad is also good as a laptop, letting you write documents, edit photos or even work in some industry apps meant for engineering or medical fields.

Both iPads have the same design and have the same features, run the same apps at a slight processing rate. All in all, we’ve realized that size is what will make you decide which iPad to buy.