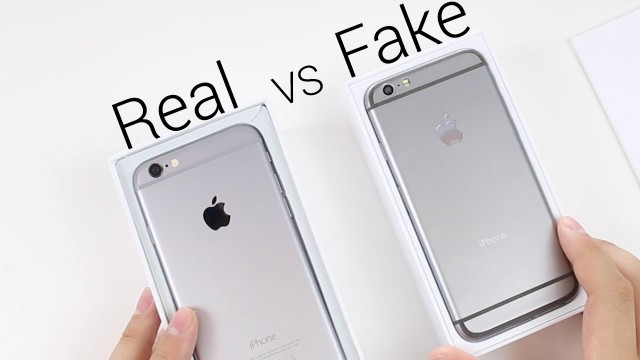 iPhone 6S, like any new smartphone from Apple is a source of inspiration and profit for smartphones manufacturers in China. The new iPhone has got the same treatment and enjoys a number of clones; some do well while others are very weak.

The features are more or less similar, but when you start to look into details or want to see what are the new features present on iPhone 6S, joy turns to sadness and you realize that you have lost a considerable amount of money and your phone is a genuine fake.

We have compiled a list with a number of issues which need to be carefully analyzed if you are considering the acquisition of a second hand iPhone.

1. The material out of which the new iPhone is made of is more resistant and has a premium feel to it, after all, it doesn’t cost a lot of money for nothing.
2. The new iPhone 6S brought a series of updates and improvements over the previous model. Much faster fingerprint sensor, front camera flash, force-touch the feature that can feel the pressure applied to the screen and many more.
3. The inscriptions on the casing. Apple smartphones replica products often do not have all the details written on the back of the phone.
4. The display is poor, renders images at a low resolution and if pressed more powerfully, it will produce a rainbow-like stain beneath your finger.
5. Although copies often have high processor frequencies, are not as well optimized and can not compete with the original iPhone. There are a lot of benchmark tests websites that can tell you a lot about how powerful is your device, also in benchmark tests, you’ll notice that fake iPhone that you want to buy on runs Android. This is the pefect time to refuse and to take your mind off your purchase.
6. IPhone cost varies depending on the time of purchase, shop and also its specifications. If in the original model, the difference is made by storage space, for the replicas, the price will be very low, to give you the false impression of a bargain.

There is a situation that does not involve replicas. There are many stolen Apple smartphones all over the world, they most often are reset locked, ask the seller to allow you completely reset the phone and to log-out from its iCloud account. If you can not achieve these two steps, you will not be able to enjoy your new device and is better to abandon the purchase.