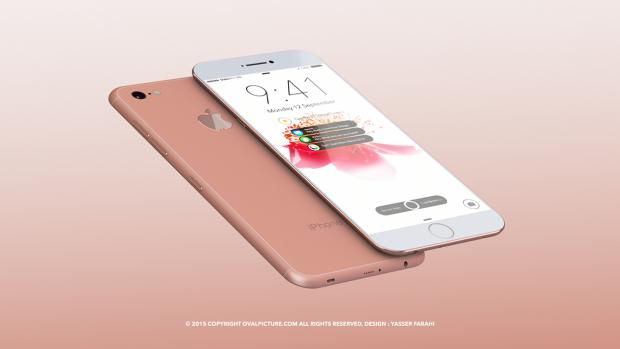 The world is already expecting the new iPhone 7. It is true that there are a few months until it will be revealed, and until we get to see the new generation of iPhones, Apple is preparing the cheapest iPhone 6 so far: iPhone 6C. Even so, a group of designers from ConceptsiPhone, created a hybrid mobile concept that combines the design of the iPhone 6 with Samsung Galaxy S6.

Called “iPhone 7 Edge” design phone combines the two most popular handsets of today. The device has a chromatic housing inspired almost 100% of the typical appearance the iPhone, yet the screen is curved 3D style as we find on the Galaxy S6 Edge.

However, the 3D screen is not as obvious as the Galaxy S6, being rather a 2.5D screen since the margins are not as curved as in the model found on the Korean flagship. The design eliminates protruding camera, which apparently annoyed Apple fans, bringing a somewhat larger camera lenses, which hypothetically would improve the existing design.

In terms of internal hardware, the device has a curved 5.5-inch screen with a 2K resolution, A10 processor with 4GB of RAM and a 3,500 mAh battery. The main camera on the back of the device would be a 16 megapixels sensor, while the front camera would be an 8 mehapixels one.

Even if Apple will introduce the next iPhone 7 with a design largely similar to that imagined here, it is not sure if Apple will decide that the new iPhone will come with an A10 processor or a screen so advanced as that of the concept. Even so, chances are that Apple might surprise everyone.