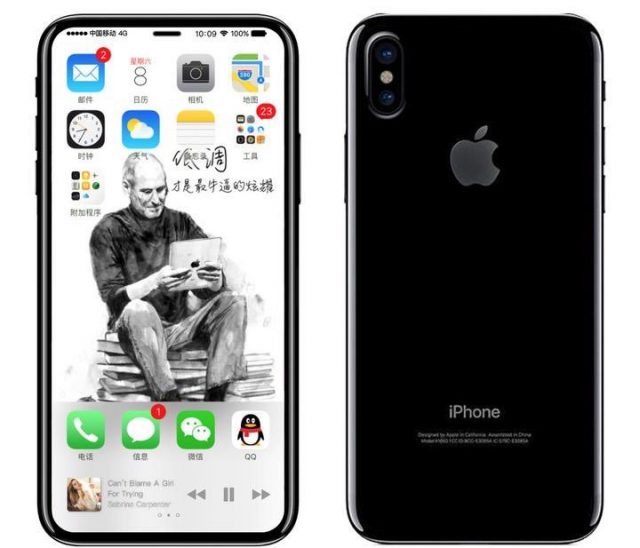 Samsung recently unveiled its Galaxy S8 and as everyone already knows, Apple is getting ready to strike back with its highly anticipated iPhone 8. The latter is expected to feature a completely unique design in comparison with previous iPhone offerings. The reason we are talking about iPhone 8 today is because the Weibo leader known simply as KK has recently uploaded a couple of different iPhone 8 renderings. If these renders are proven to be true, it means that this is our first glimpse at iPhone 8.

We should mention that Weibo is practically the Chinese Reddit and that the member known as KK has successfully leaked tech information previously. Nonetheless, the leaked render pictures show us that iPhone 8 will measure in at 137.54 mm tall and 67.54. If these measurements might sound familiar is because they are. The already existing iPhone 7 measures at nearly the same size and width. Sadly, the render leaks do not show us how thick iPhone 8 is going to be.

Many are sparking rumors about iPhone 8’s edge to edge display but these leaked renders gives us the exact measurements. iPhone 8 will feature a 5.768 inches panel which will cover its entire surface thus making it almost bezel less. The reason we are saying almost is because there will be a 4 mm bezel and 2.5D curved glass around the edges.

What’s really amazing is that if these render pictures are proven to be true, it means that Apple has managed to install the top earpiece, microphone, front camera and sensors beneath the display glass. In addition, the traditional physical home button seems to have been removed. Apple has definitely installed the Touch ID beneath the device’s display instead.

One of the most interesting things which can be seen in these render pictures is that the rear dual camera setup has been widened. This might actually mean that Apple wants to include augmented reality features. The separation of the two lenses helps 3D and augmented reality sensors to present a better perspective.