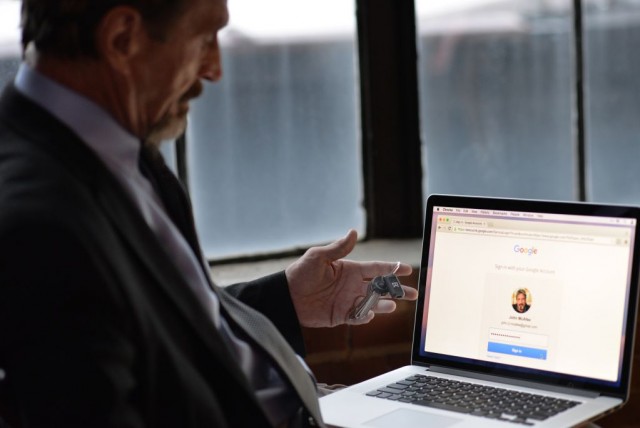 In recent years we have become increasingly dependent on passwords and John McAfee wants to eliminate this stress source by introducing a gadget called Everykey.

More and more companies are making significant efforts to eliminate the introduction of complicated passwords without that process involving compromises on the data security. After all, no one wants to be responsible for creating vulnerabilities that will endanger your private information.

After detailing the efforts of Google and Yahoo on the subject, it was the turn of John McAfee to come up with a similar concept. McAfee founder, John McAfee, is the one behind the popular antivirus, but he now has no connection with that product as sold part of his company.

McAfee’s approach on the mater, which seeks to obtain financing through a campaign on Indiegogo, is named Everykey and involves using a very compact gadget for eliminating any need to introduce a password on a wide variety of equipment. Basically, it is a USB stick and a device similar to a smart bracelet created to achieve the desired effect. Both are basically some digital keys.

From a technological point of view, in the film presentation, John McAfee wanted to detail that Everykey uses military grade encryption algorithms, and are therefore hard to crack. The scenarios imagined in which such a device would be useful varies from unlocking a laptop, smartphone or tablet to unlocking intelligent doors system and other equipment. It can also be used in tandem with different websites. Simply get Everykey close to one of the devices in the examples above, and authentication will occur automatically. When you distance the gadget from the same equipment, it locks automatically.

For embodiment, John McAfee seeks to obtain $20,000, but at the time of this writing, it already exceeded the threshold of 60,000. To obtain more details about the project visit the Indiegogo website.