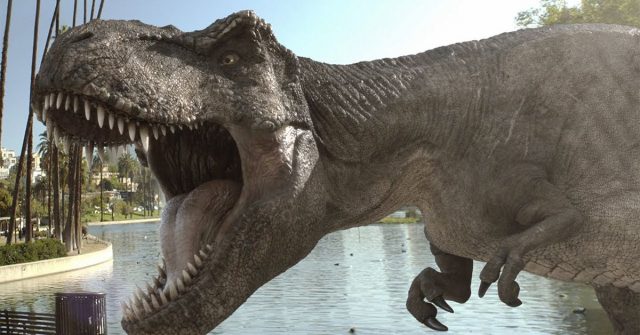 Based on the success of the 2015 movie and the hype for the upcoming movie in June, Universal Studios in collaboration with the video game developers at Ludia are releasing Jurrassic World Alive, a brand new mobile game!

Similarly to the mechanics of Pokemon GO, players of Jurrassic World Alive will be able to stroll around the real world and gather 100 exclusive species of prehistoric reptiles and even splice their genes together to create their own unique breeds! This all works on the same concept based on Augmented Reality. We do not know, sadly, what this game’s version of pokeballs will be.

What this game brings new to the table is that players don’t have to run around as much! Reportedly there exists a mechanic that allows you to create a small friendly robot. This virtual companion will scan the surrounding area for dinosaurs in your place. Don’t think you can just sit at home forever and let everything come to you, though, because you are still going to need to go out and hunt for in-game currency and batteries for said drone.

Another difference from Pokemon GO is that you will actually be able to battle other players using the dinosaurs you catch. That much is confirmed, though the development team hasn’t given us any further information on how exactly this will work.

Reportedly the game will be released for Android and iPhone and iPad devices sometime this spring, possibly synchronized somehow with the release of the new movie, Jurassic World: Fallen Kingdom.

In our opinion, this is a welcome change of pace, since this might be the first decent tribute to Pokemon GO to appear, and after such a long time since the original Augmented Reality game showed up. It seems like 2018 will give us plenty of options with Jurassic World Alive and the upcoming Ghostbusters and Harry Potter AR games.

If we’ve made you curious (hopefully we have!), you can register over at JurassicWorldAlive.com and be alerted when the game gets released or stay tuned and we will inform you as soon as possible! In the meanwhile, you can tell us your thoughts in the comment section down below.