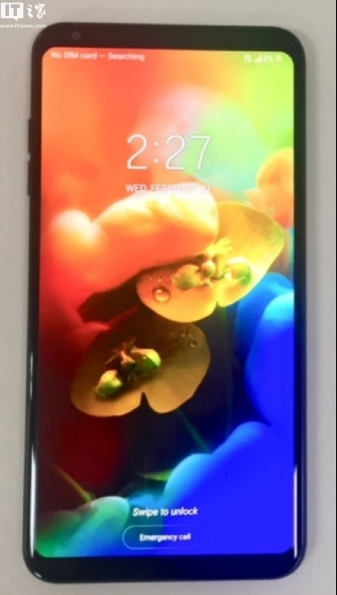 We previously reported on a major leak which unveiled LG V35 ThinQ’s powerful specs but now, a brand-new leak is showing us that the smartphone is going to look like. Competing in the smartphone industry is getting tougher each year. Apple and Samsung are innovating their smartphones with cool features such as the full-screen displays, and LG doesn’t have any other option than to follow in their footsteps.

Luckily, the newly leaked picture shows us that LG did a fantastic job designing and installing a full-screen display on LG V35 ThinQ. The smartphone has a sleek design which closely resemblances Samsung’s latest Galaxy S9, but there is something special about it. The rounded edges give LG V35 ThinQ a fluidity that Galaxy S9 lacks.

The design looks impressive, but we shouldn’t overlook the fact that LG V35 ThinQ is packed with only the best hardware specs available right now. Take for example the smartphone’s P-OLED display which features a high pixel resolution of 1440 x 2280.

Now that we cleared LG V35 ThinQ looks impressive and that its display technology is top edge, let’s check out what type of specs the smartphone hides under its hood. LG V35 ThinQ ships with Qualcomm’s octa-core Snapdragon 845 which is the most powerful processor for smartphones in the world.

Things get even better than this for LG fans because the smartphone’s impressive processor is also paired with 6GB of RAM and an Adreno 630 graphics processing unit which means that LG V35 ThinQ will excel at running mobile games.