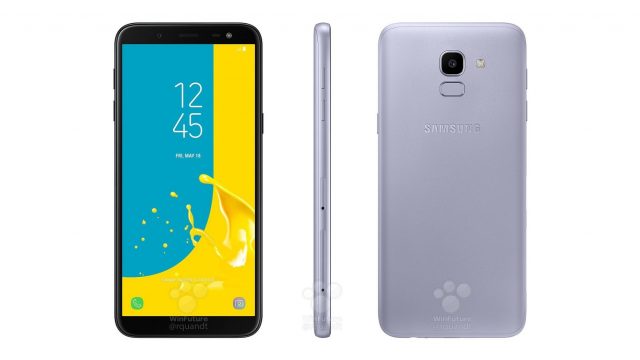 Yesterday we talked about how Samsung Galaxy J6 (2018)’s promotional poster was leaked and how it unveiled some cool and innovative features about it. Today we have something even better because an official press render, which shows us what the smartphone is really going to look like has surfaced on the web. Not just that, but the press render was also accompanied by the smartphone’s full specs sheet and we have to admit that Galaxy J6 (2018) looks impressive.

Even though there have been a bunch of leaks which gave us a glimpse of what Galaxy J6 (2018) looks like, they all pale in comparison with this HD press render. From what we can see, the smartphone will be sporting an Infinity Display that’s going to give it a sleek look. Moreover, the smartphone features thin bezels around the display and this is going to make it great for watching videos.

On the downside of things, the leak confirms to us that Galaxy J6 (2018) will not feature a physical Bixby button. Rumor has it that Samsung wanted to install its AI (artificial intelligence) assistant on Galaxy J6 (2018), but it looks like that rumor was proven to be false.

Moving on from the cool looking design, Galaxy J6 (2018)’s display will measure in at 5.6-inches and it will use Super AMOLED technology. This display technology makes it possible for Galaxy J6 (2018) to offer a high pixel resolution of 1440 x 720.

When it comes to hardware power, the expectations are not that high for Galaxy J6 (2018) since this smartphone will fit in the mid-budget range. However, Galaxy J6 (2018) impresses us with its Exynos 7870 processor that’s paired with 2GB, 3GB and 4GB of RAM, depending on the model.