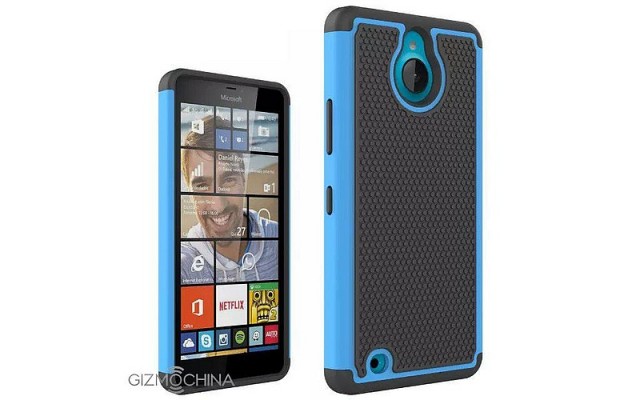 Microsoft was used to success before they decided to step forward into the mobile phone industry. Since they have entered the smartphone markets, its been an absolute horror show for Microsoft Mobiles with losses amounting close to $8 Billion and with almost 8000 employees being let off. After the huge success of Microsoft’s latest trademark software “Windows 10” the company have successfully earned the goodwill of the consumers. Now they are trying to cash it in by releasing smartphones in continuous succession.

It is suggested that Microsoft have been working on a brand new smartphone after the release of Lumia 950, Lumia 950 XL and Lumia 550. The suggestion is determined by looking at some leaked images of the new smartphone’s protective cover.

Gizmochina (via GSMArena) is known to be the website which has apparently leaked the images of the protective gear of Microsoft Lumia 850 which is yet to be announced. According to the leaked images of the protective gear, we can figure out what the outside of Lumia 850 would look like. The leaked images show that the smartphone will have a rear camera at the top center position and placed above it will be a single LED flashlight. On the right side of the unannounced smartphone we will find the power button and volume button. The leaked images also reveal that Lumia 850 will come in a blue variant, it is unknown if there will be any other color variants for this device.

Since the leaked images only describe the smartphone in its protective case, nothing more could be said about the looks of the unannounced smartphone as of now. If we were to go by the previous rumors about the unannounced Lumia 850 smartphone, we might come to know that Windows 10 based will sport a metal body. The unannounced device is said to come with 10 MP for rear camera with Zeiss lens. Lumia 850 is said to feature a 5 inched screen with 768 x 1280 pixels resolution display.

The rumored Lumia 850 will run on a Qualcomm Snapdragon 410 SoC processor, the device is also tipped to have 1GB of RAM with 16GB inbuilt storage and a long lasting 2650mAh battery.

What are your thoughts on the latest rumored Microsoft Lumia 850? Do you think Microsoft can end their woes in the smartphone market? Comment below and let us know.