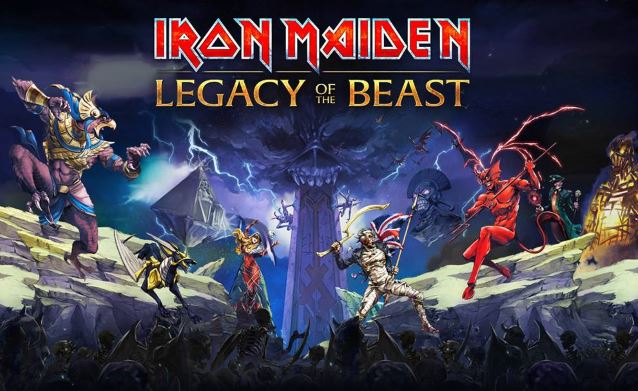 The popular British rock band Iron Maiden is working hard to finish a mobile game called Legacy of the Beast.

Over the years, Iron Maiden might have become synonymous with rock music for many fans of the genre, but even after decades of activity, the group apparently wants to show us that the band does not ignore the new ways to promote itself. As a result, they are working hard to develop a game for iOS and Android that will reach the general public this summer. The new game will be called Legacy of the Beast and will be anchored in the band’s albums throughout the history, fictional characters created by the band and, not least, the very interesting covers of their albums.

Iron Maiden’s Legacy of the Beast will be a new RPG that might please the many fans of the genre who wanted this experience on mobile. “Players explore new worlds, traveling through time and fight against a number of dramatic and interactive characters inspired by Iron Maiden’s albums and the band’s artistic creations throughout the years. The gameplay is enhanced by the soundtrack, which is using songs from the band’s entire history, including live recordings of some songs that have never been published before. The latter was adapted to the game by the engineer Tony Newton watched closely by the bassist and band founder Steve Harris.”

If your impulse in such circumstances is to overlook such creations as music bands should be limited to one artistic area, you’re wrong. In the past Linkin Park and Avenged Sevenfold were successfully involved in video game development. Skrillex has even managed to develop its own mobile game to promote a new album.

Nobody knows if Legacy of the Beats will be a successful game that manages to attract and people which are not passionate about Iron Maiden. In any case, the intention is commendable.