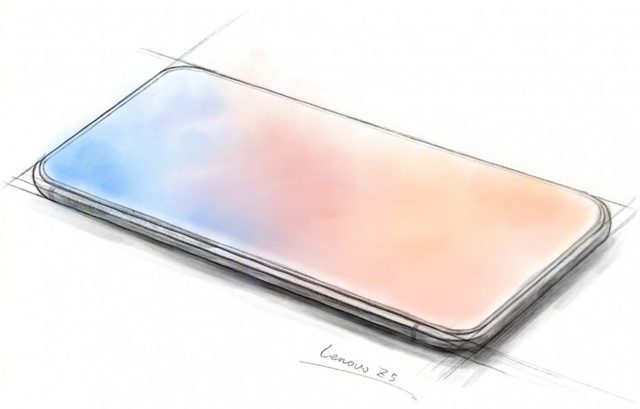 Announced with a teaser-image posted by Lenovo’s vice president, Chang Cheng, the Lenovo Z5 could be the first smartphone to completely remove the side frames around the screen, while also dropping the notch that most manufacturers have used since its first appearance in the Apple iPhone X. Apparently, Lenovo Z5 will have a screen-to-body ratio of 100%.

According to the leeks that emerged on the renowned Chinese Weibo social networking, Lenovo has developed four new technologies that, when put together, allowed the engineers to totally remove the frame around the screen, including the notch allocated for the front camera, the earphone, and sensors.

The Lenovo’s VP did not disclose which were the technologies the engineers used to achieve the frames and notch removal.

However, we can find some similar examples in products that have already been launched, such as the camera hidden in a compartment on the side of the casing and automatically extended when the capture application is started.

The earphone can be integrated just below the screen’s surface using a piezoelectric driver available to component suppliers and already used by the Xiaomi Mi Mix rival.

The same can be applied to the fingerprint sensor, which can be integrated under the display.

Lenovo Z5 will be released on June 14th

According to the provided teaser, officially released by the Lenovo’s vice president, Chang Cheng, the Lenovo Z5 will come in a unibody metal housing.

Besides, it has been showed that it will include a USB-C connector for charging and will boast a flat, cut screen to follow the rounded contour of the case.

Also, it has been said that the Lenovo Z5, which could be the first phone in the world with a screen-to-body ratio of 100%, will be unveiled at an official launch event which was already scheduled for June 14th.