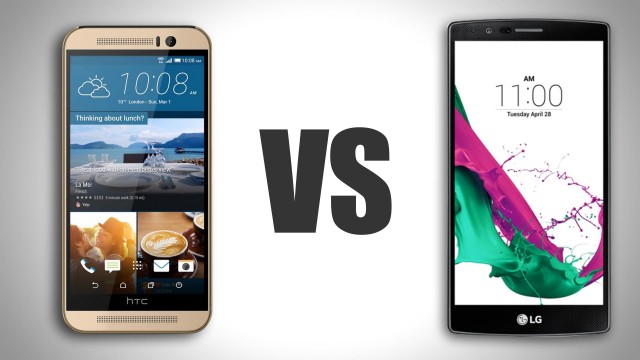 We’re comparing two flagships that have been released last year: LG’s G4 and HTC’s One M9, two successors that came with some cool upgrades and new features. The two manufacturers have tried to persuade owners of previous models to buy the newer smartphones, but HTC did the mistake to bring a successor that looked almost identical to its predecessor, while LG offered a second variant design which looked… cheaper.

The LG G4 measures 148.9×76.1×9.8 and weights 155 grams, and one of the two versions has genuine leather on its back with vertical stitching running down the middle, while the other model has a plastic back with a 3D diamond pattern. Also, the physical buttons – power and volume, are placed under the rear camera, as on the previous G3. On the other hand the HTC One M9 measures 144.6×69.7×9.6mm and weights 157 grams, but its body is made of metal (aluminum) and the two horizontal lines from the top and bottom remind us of Apple’s iPhones.

Both devices have been released with an internal storage of 32GB. But while LG G4 allows you to expand its capacity up to 128GB, the HTC One M9 supports expansion up to 200GB.

The LG G4 features a removable battery of 3000 mAh, which is slightly more powerful than the non-removable 2840 mAh battery of the HTC One M9.