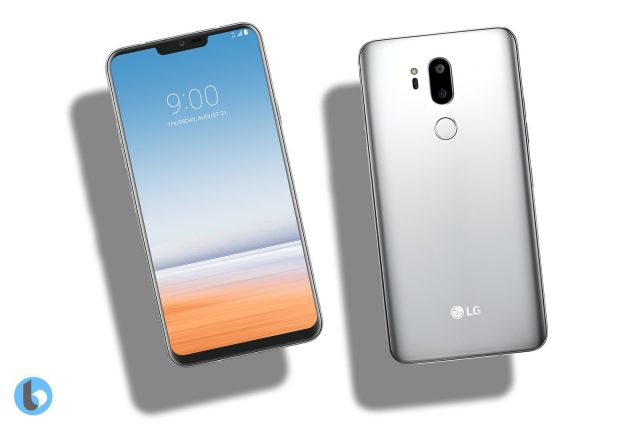 The LG G7 ThinkQ should be officially launched over the next week but images showing the phone from all angles possible leaked on Twitter thanks to Evan Blass (@evleaks).

Although they have not been selling well in recent years, LG smartphones have never shown poor quality. At the same time, the South Koreans have been ambitious to implement many more or less successful experiments.

Respecting the tradition of the past years, LG is preparing to launch its new top phone for the current year. This time it will be titled LG G7 ThinQ, where ThinQ is probably a reference to advanced built-in technologies and numerous features of artificial intelligence.

In the last few weeks, many rumors regarding the upcoming LG G7 have been released but now it’s the first time we’re able to see the whole phone.

On this occasion, the presence of the notch, the two main cameras on the back, and the fingerprint sensor in the same comfortable position are confirmed.

Most likely, the phone will be available for purchase in multiple colors, but this time we only see the silver version of the device.

Unlike the iPhone X, it is noteworthy that the lower edge of the phone is a bit wider, although the notch looks smaller.

The upcoming phone will boast a 6-inch M+ LCD display with RGBW technology, capable of a reduction in power consumption of up to 35%.

Under the hood, LG G7 ThinQ will feature a Qualcomm Snapdragon 845 processor with 4 GB of RAM and a 128 GB internal storage space.

On the edges, the arrangement of the buttons is far from revolutionary. We have the power button on the right and two volume buttons on the left. In addition, under the volume buttons, there is the dedicated Google Assistant button.

On the top of the device, there is the SIM card slot and the microSD card slot.

Charging is possible via a USB C port, and a jack for the traditional headphone jack is found in the bottom right corner.

The new LG G7 ThinkQ will be part of a simultaneous launch announcement in Seoul, South Korea and New York, on May 2nd.