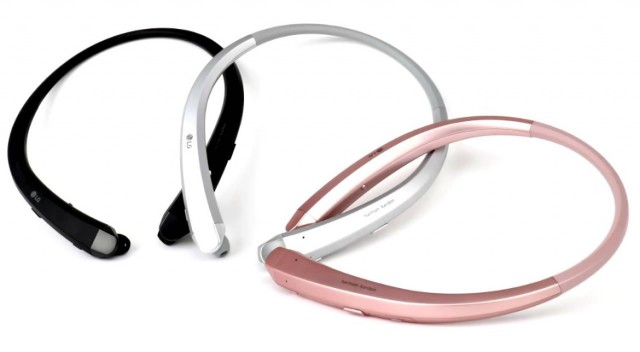 With the LG Tone series devices, LG gave rise to a new chapter in the series of revolutionary headphone design and the new LG Tone+ is the latest model.

Although there are only a few days until CES 2016, one of the largest technology fairs taking place globally, South Koreans apparently did not have the patience to announce innovations that will make waves in 2016. Thus we find that at the 2016 Consumer Electronics Show in January we will know all the details related to pricing and availability of the new LG Tone+ headphones. Pictured above, these are the successor LG Tone HBS-810 Ultra. In principle, these headphones are designed to offer an impressive listening experience at an affordable price.

LG Tone+ HBS-910, as their full name, do not introduce revolutionary changes compared to other models in the series, but looks great and seem comfortable. In addition, it will coordinate well with your smartphone, whether it is a LG, Samsung or iPhone, due to gold, silver or black designs. For improved quality of calls taken by headphones, LG Tone + incorporates a system of two microphones, ideal even for audio recordings. The same microphones will facilitate the cancellation of a significant amount of background noise.

At a closer look, headphones are a bit thinner and lighter, but without becoming impoverished. The sound is louder due to the use of a new type of diaphragm for the speakers. Quad Advanced Layer System will enhance bass and treble clarity. Through Tone & Talk, the headsets will do a great job to read your text format immediately after you received.

LG Tone+ headphones will be available starting from February in Asia, followed in Europe, Latin America and the United States to reach shortly thereafter. The price is currently unknown.