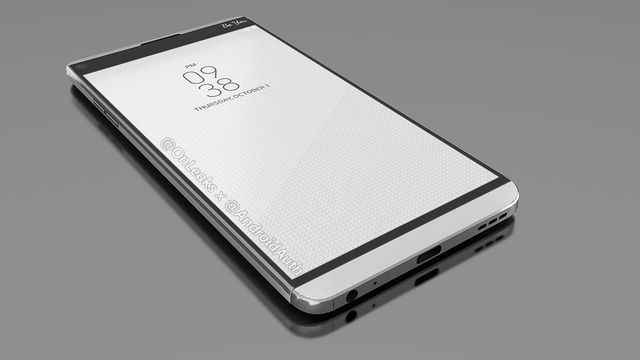 Last year, LG has decided to launch a phablet smartphone range as an alternative to the flagship G4, which was successful among those who prefer a larger screen. V10 came with top hardware, a secondary display dedicated to notifications and supplementary information and an extraordinary casing. It seems that this year we will again receive a smartphone of this class from LG, unofficially called V20, which will borrow many elements from the current flagship of the company, G5.

Inland unofficial information coming from Android Authority website and Twitter account @OnLeaks who have managed to achieve a 3D model based on the descriptions of those who have seen the device. V20 will use a similar construction to G5, if these images are indeed based on reliable sources, it preserves the display side at the top, but appealing to the modular design of the smaller “brother”.

The descriptions suggest it will measure 159.5×78.1×7.7.5-8.8 mm (length, width, thickness) and that will have a main display diagonal of 5.6″ or 5.7″. It will have a Snapdragon 820 or 821 chipset, 4GB RAM and a dual camera, very similar to the LG G5. The new V20 will also use USB Type-C connector and will be released along with modular accessories that will replace the bottom of the device. On the back will be positioned a “Power” round button, which integrates a fingerprint sensor, volume buttons are on the left side of V20, recalling again the G5.

The information currently available suggests that the disclosure of the phone will be held on September 6th, it is expected to be released this fall, with the new Android 7.0 Nougat pre-installed. It could thus become the first device from the Nexus range receiving the latest version of the Google operating system.