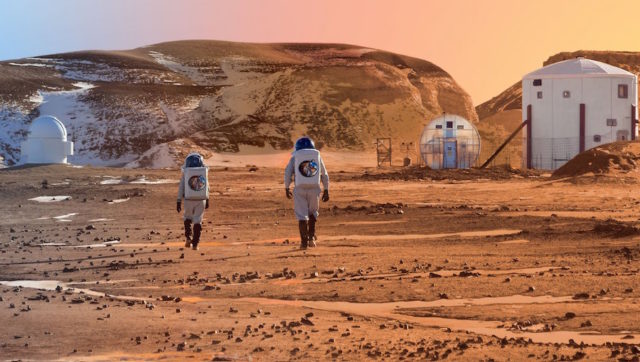 The Mars surface is lethal for everything that means vegetative cells and makes the most of the regions and near-surfaces as uninhabitable.

Recently, after the latest researches made on Mars’ surface, a mix of toxic chemicals have been found on the red planet and they can exterminate every living organism that may have been discovered on Mars, thus, lowering the chances for life to ever develop.

Also, the non-existence of an Ozone layer determines that the red planet is stricken with high levels of ultraviolet radiation.

Experiments made by researchers from Edinburgh University have discovered that when this is mixed with the compounds that were found in the Martian soil, they have turned into impressive bactericides, which have efficiently sterilized the higher levels of the landscapes.

Jennifer Wadsworth, a postgraduate astrobiologist from Edinburgh University has taken these compounds and, together with the astrobiologist Charles Cockell, has mixed them with Bacillus subtilis, which is a common Earth soil bacterium usually found on space probes.

When they were combined with an oxidant called magnesium perchlorate and disclosed to ultraviolet radiation, which is very much alike to the light that surrounds Mars, the living organism was killed twice as fast.

Perchlorates have been found by Nasa’s radar for a certain amount of years and have been first discovered by the Viking Lander missions nearly 40 years ago. Their presence was proved by the Phoenix Lander spacecraft.

Another round of experiments has looked at the aftermath of iron oxide and hydrogen peroxide, also discovered in Martial soil. When the bacteria was stricken with ultraviolet rays in the close existence of the perchlorates, peroxide and iron oxide, the bacteria were exterminated 11 times quicker than only with perchlorates. Thus, what makes life on Mars be impossible is caused by the toxic mixture of the peroxide and iron oxide, the UV rays and perchlorates, have stated the researchers in Scientific Reports journal.

They added that: “Our observations show that the surface of present-day Mars is highly deleterious to cells, caused by a toxic cocktail of oxidants, iron oxides, perchlorates and UV irradiation” and that “The combined effects of at least three components of the Martian surface, activated by surface photochemistry, render the present-day surface more uninhabitable than previously thought.”