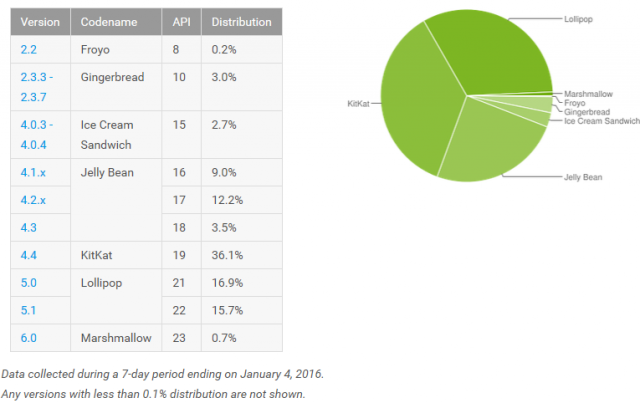 Google has published the monthly report on versions of Android used worldwide by the devices that connect to Google Play Store. In December, we are witnessing an increase for the latest versions of the operating system for mobile phones, while older versions easily begin to decline in popularity. Unfortunately, although it is on the market for more than three months, Android Marshmallow is not yet installed on even 1% of the devices that participated in this survey.

On top of the Billboard remains Android 4.4 KitKat, which fell by 0.5 percent compared to November, but remains the most prevalent, with 36.1% of the mass of devices. In second place we have Android Lollipop, which in turn is divided in two variations: Version 5.0, that has increased from 16.3% to 16.9% and 5.1 from 13.2% to 15.7% (an increase of 2. 5 percent). However, the two versions of Lollipop together do not exceed 4.4 KitKat’s popularity.

Starting fourth in the top we already see very old versions of Android, such as 4.2 with12.2%, Android 4.1 with 9%, Android 4.3 with 3.5%, 2.3 (Gingerbread) with 3% and 4.0 with 2, 7%. The last two places we have two variants that have still not achieved even one percent of the devices. It’s the new 6.0 Marshmallow which is second to last with 0.7% and 0.2% has recorded the ancient 2.2 Froyo. Marshmallow will certainly grow pretty much in the coming months, as all companies producing smartphones will begin to launch devices with the new version pre-installed, regardless of the market segment targeted. Unlike Lollipop, Android 6.0 has arrived faster in this top thant last year in January, when the 5.0 version was not listed yet, being found on less than 0.1% of devices.

As a comparison, in the Apple camp things are completely different. 71% of the devices on the market are running on iOS 9, the latest version of the mobile operating system, while only 21% use version iOS 8. The remaining 8% are still running an older version.