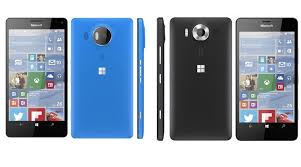 Microsoft has been very busy in the market in the past year. After suffering unimaginable losses in their mobile phones division, the company did enough with its famous Windows 10 launch to get back in the good graces of the consumers.

Microsoft suffered more than 8 billion dollar in losses in the smartphone department, in the consequence, the company had to let go of more than 7500 employees all around the world. This was by far arguably the worst period for Microsoft as a company.

After reporting huge profits with Windows 10, Microsoft were quick to capitalize on their better image and launched several smartphones. Two of the stand out devices which were launched by Microsoft is Lumia 950 and Lumia 950 XL. Both the smartphones were released on 20th November by Microsoft. The Lumia 950 comes with 5.2-inched screen for display. The smartphone by Microsoft comes with 3GB of RAM and has the inbuilt storage capacity of 32 GB which can be expanded up to 200GB through a microSD memory card.

The Lumia 950 sports a powerful 20MP rear camera accompanied by a triple LED flashlight. In the front the device comes with a 5MP camera and has the trademark camera dedicated button on the side.

Microsoft Lumia 950 runs on a solid Snapdragon 808 processor. The smartphone comes with a long lasting battery of 3000mAh and will cost you up to $549.

The Lumia 950 XL is a lot similar to Lumia 950 in some features. It also packs 3 GB for RAM and has the same 20 MP rear camera accompanied by a triple LED flashlight and a 5 MP camera at front with a camera dedicated button at the side. In the storage department also this device has similar 32 GB of inbuilt storage which is expandable up to through microSD card. This device also supports 4G LTE connection and contains a USB Type-C port as well.

The difference comes in the processor, Lumia 950 XL runs on a stronger Lumia 810 SoC processor and comes out with a larger screen of 5.7 – inches of display. To support the bigger screen the battery is also larger with 3340mAh for Lumia 950 XL.

What are your thoughts on these devices? Comment below and let us know.