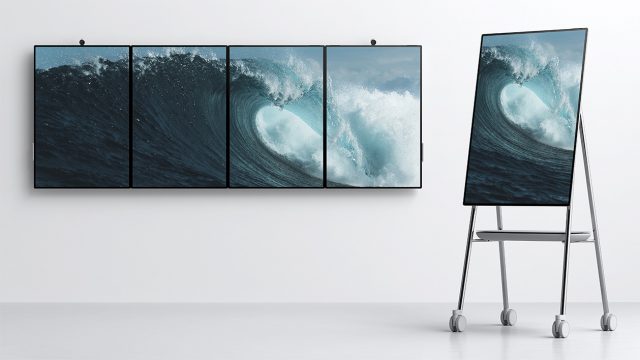 Microsoft has led the way for the rest of the industry with a giant interactive whiteboard that has been surprisingly successful, reaching, despite its high cost, over 5000 customers in 25 countries around the world. Its new version, Microsoft Surface Hub 2 ‘mega-tablet’ will arrive in 2019 improving all aspects of the original model.

A couple of months ago we saw the first brushstrokes of this supertablet for conference rooms and collaborative companies and yesterday Microsoft offered the launch date and more details of a device focused on business environments, finance, automotive, retail, education, and healthcare sectors.

The new Surface Hub 2 will boast a 50.5-inch multi-touch panel with 4K resolution.

In addition, it will have much thinner bevels and allow up to four of them to be placed in either a vertical or horizontal orientation and all of them will work together as one massive screen.

However, other larger versions have not been mentioned as in the original model.

Microsoft has also announced a partnership with the specialist Steelcase to provide a range of media so that devices can be moved easily if needed, as we saw in alternatives such as the Google JamBoard.

Surface Hub 2, codenamed ‘Aruba’, will be based on the technology of Perceptive Pixel, a company acquired by Microsoft and specializing in the designing and marketing of large format touchscreen.

In addition to the display, Microsoft will enhance the internal hardware and connectivity of the original 2015 model and will upgrade the software firmware and the operating system.

This interactive whiteboard lets you run applications like Office 365 from laptops, tablets or smartphones, collaborating and sharing content on the big screen, live or from anywhere on the Internet.

Video conferencing is also a relevant feature with the new business Skype, which allows you to write notes on screen in addition to voice and video.

Microsoft Surface Hub 2 ‘mega-tablet’ will be available in 2019 according to the announcement made by the company.