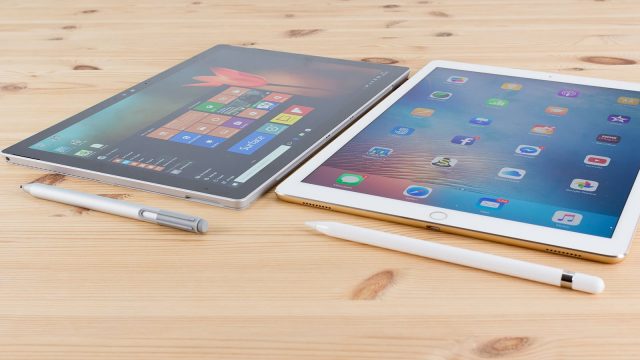 Apple and Microsoft are two of the biggest tech manufacturers in the world and the two are competing against each other every day. It all started with their operating system but now it has extended to tech devices as well. Last year, both companies decided to refresh their 2-in-1 lineup and they are expected to do the same this year as well.

Microsoft took the market by storm with its Surface Pro 4 last year. Apple did the same time thing with its new iPad Pro lineup. The reason why these two devices compete against each other on a daily basis is because both of them are hybrid tablets that have been especially designed for business purposes.

Many business owners never know which one to pick since they seem to bring the same features. Well, this isn’t the case. Today we’re going to go over what iPad Pro and Surface Pro 5 bring to the table in terms of hardware performances and see which one improves work productivity the most.

The reason why we decided to compare the two gadgets in this department is because hardware power matters the most. Additionally, work productivity is definitely influenced by the device’s hardware performances. Nonetheless, let’s pop up their hoods and see what we can find.

Right from the first glance we can see that Surface Pro 4 is powered by Intel Core m3, Core i5 or Core i7 depending on the acquired model. All the aforementioned chipsets are very impressive and all of them provide owners with impressive hardware performances. Even better, these processors are paired with 4GB, 8GB or 16GB of RAM.

On the other hand, we have iPad Pro that is fueled by Apple’s own A9X processor. This chipset has been paired with 4GB of RAM and it’s capable of taking on Microsoft’s Surface 4.

Both hybrid tablets are very impressive when it comes to hardware power. Apple managed to create one of its most powerful processor yet, but it pales in comparison with the high-end Surface Pro 4 model. In this brief comparison we have to give it to Microsoft’s Surface Pro 4.