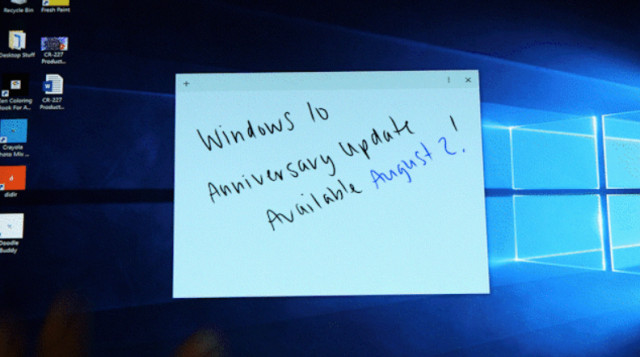 Microsoft has confirmed in a blog post that the major update of Windows 10 will be released in the second day of August. The company has also published the full list of new features that will be included in this new update, which will make touchscreen devices more useful. Also, Cortana will be upgraded and the system will receive security upgrades.

On July 29 2015, Microsoft was releasing Windows 10, the “last version of Windows”, but the company promised to bring updates every once in a while. Soon, the Anniversary Update will make its appearance and will be available for both simple consumers and companies, who will take advantage of Cortana’s enhanced capabilities. The virtual assistant was firstly introduced in Windows Phone 8.1 and Microsoft has allowed Insiders to enable “Hey Cortana” in Windows 10 Build 9926, at the end of January 2015. This assistant was one of the most useful additions in Windows 10 and now it takes commands on lock screens, saving users from unlocking their devices and giving voice commands to Cortana. This way, they will ask her questions or to play music without making great efforts. Cortana will have the ability to remember users’ frequent flyer number and it will repeat it on command.

A new tool will be added to Windows 10, and it will help users to easily take notes using their touchscreen-enabled tablets or laptops. With the Windows Ink features, users will no longer need to wait for an application to launch, as they will use a virtual notepad to take down notes, to add doodles to their images.

On July 29, Microsoft will end free upgrades to Windows 10. After the launch of the consumer edition of Windows 10, Windows 7, 8 or 8.1 users were able to upgrade for free only if they had a valid license for their OS. The promotion will no longer be available when Windows 10 will turn one year old.