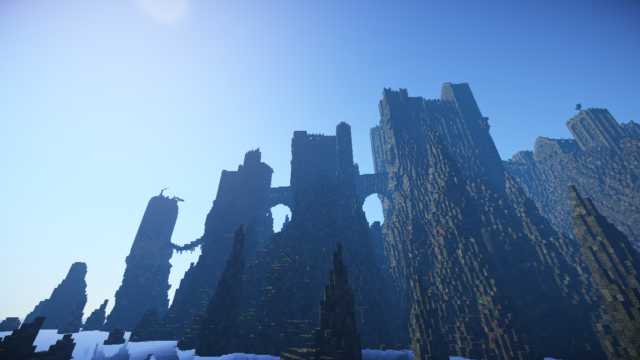 Footage has been made of all the places from Game of Thrones that have been constructed in Minecraft. It all started with a few fans laying the first brick six years ago. Thousands of Game of Thrones fans volunteered to help recreating the world since it was launched. The name of the world is WesterosCraft.

You can roam the fantasy land and visit Castamere, Misty Isle, the High Hermitage, Kings Landing, Oldstones, and many more places.

Today the model is almost 65 % completed, so there’s a lot of work to be done until it’s finished. The world will be used as a setting for players who want to experience their own version of Game of Thrones.

Isaac Hempstead-Wright was very impressed with the size of the world, that he himself helped them promoting WesterosCraft with a voiceover.

For those who aren’t familiar with the game, Minecraft is a Lego simulator and a loved online game, having 100 million users who play regularly. It is an internet phenomenon and Microsoft is helping their users connect easier and faster with launching an update.

The update will let users play cross-platform, removing the barrier of using different devices. Microsoft also assures the players that the update is secured and will not put anyone’s account in danger. For parents, there’s also a great feature which allows them to limit their children access to some options, chat filters and parental control.

Children and adults all over the worlds are able to use Minecraft to build massive structures such as castles, houses, skyscrapers, towns and so on and then they can upload them so that other users explore them.

WesterosCraft is still in the making, as there are a lot of details and places that haven’t been added or haven’t still appeared in the TV series.